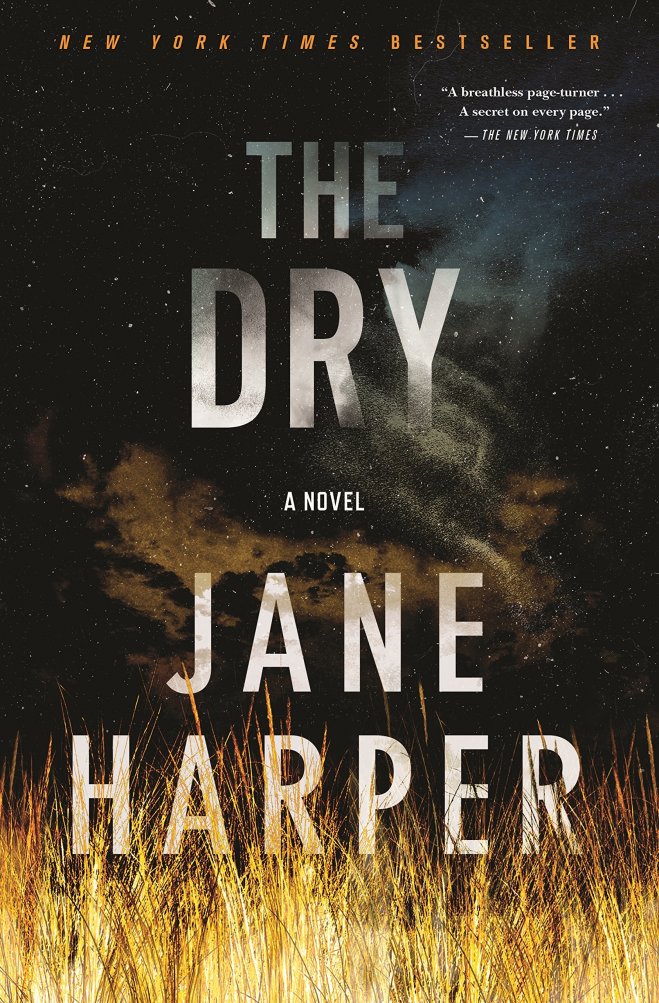 The Dry by Jane Harper

Harper delivers an absorbing yet somewhat ‘run-of-the-mill’ thriller. The story is one that has been done time and again: our main character returns to the small town where they are from (having left after certain traumatic events) and is forced to confront his past ghosts as well as his new ones.
Now, despite these stereotypical elements, Harper reworks this stock plot into one gripping tale. The very first scene is thrilling: Aaron is at the funeral of his old best friend, Luke, who committed suicide after mercilessly killing his son and wife. This opening chapter brims with a tense unease: Aaron and his father where forced to leave their hometown Kiewarra years earlier, and people have not forgotten him. Aaron is all too aware of how his small town works: gossip, suspicions, petty jealousies. Yet, before he can leave, he finds himself helping the local police: was his friend capable of murder? Had he done it before?
The setting is one of the strongest aspects of the novel. Kiewarra is facing the worst drought in centuries, and locals are desperate. Harper captures this feeling of dread perfectly: farmers and shopkeepers alike are restless. The violent act that Aaron’s friend is accused off does not help the community: now more than ever, they are itching for a fight, or someone to blame. And the heat spurs their hatred and fear. Against this sizzling backdrop, Aaron confronts this latest act of violence as well as seeking answers for what happened all those years ago.
While I found this novel to be engrossing, I wasn’t very shocked by the storyline. I was hoping it would turn into much more of complex mystery, but I predicted every single twist and turn of Aaron’s investigation. The old ‘mystery’, the one surrounding his childhood sweetheart, was rather pointless. It just stole the limelight from current events. And those flashbacks were just so…clumsy. They interrupted the flow of the story. By showing obvious events Harper diminishes the thrill of her own story. Also, they read more awkwardly then the rest of the novel.
So, while this novel is predictable, and I did find Harper’s structure – as in the inclusion of flashbacks – to spoil the overall suspense, the vivid setting that accompanies Aaron’s investigation keeps the momentum of the story going. A promising beginning that needs some tweaking.