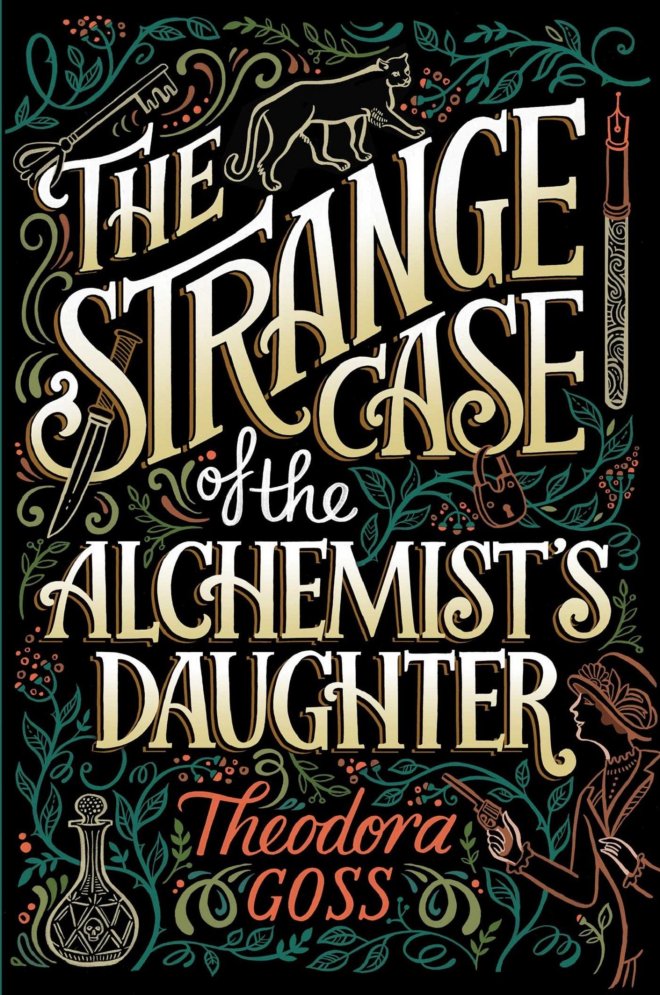 The Strange Case of the Alchemist’s Daughter by Theodora Goss

What a pity. I was expecting The Strange Case of the Alchemist’s Daughter to be a sort of gender-bender take on famous Gothic and Crime classics. Sadly, Goss doesn’t handle well intertextuality so well. She includes too much and the sheer amount of things she tries to drag into her story makes the existence of this novel seem like an excuse to show off all of her favourite classics.
The beginning wasn’t so bad. Mary Jekyll has just lost her mother and is experiencing financial troubles. Some information regarding her now deceased father’s connection to Mr. Hyde brings her into the path of Sherlock Holmes and his associate Dr. Watson. Through both luck and chance Mary ends up meeting Diana, Beatrice, Justine and Catherine. They are all connected through the work of scientists such as Mary’s fathers.
Now…one of my main issue with the story is that it all feels so incredibly easy. Mary manages to accompany Holmes and Watson in their investigations…are we to believe that they would have really let her come along? Especially since she really isn’t as sharp or bright as we are initially lead to believe…?
Mary’s adventures are incredibly repetitive: here she finds Diana, then she meets Beatrice, and then Justine and Catherine…and guess what? They are all connected! And they are all fine working together just a few minutes after having met one another.
The biggest…biggest problem was the writing style. Goss decided to make one of her heroines the writer of this ‘novel’. So throughout we have a constant commentary from the characters, talking about the way Catherine is writing, what she is including etc.
I thought that it slowed the story’s pace and it came across as terribly conceited. A description could be followed by comments such as:

JUSTINE: Is the story supposed to be jumping around like that, from Mary’s head, to Diana’s, to Beatrice’s?
CATHERINE: I told you, this is a new way of writing.

Catherine often explains the addition of certain scenes or dialogues:

We’re trying to recount how we all came together, describe who we are. That’s not just the story of how we solved the Whitechapel Murders. It’s the story of us.

Comments of that type made it hard to ‘get into’ the actual narration. Each time I tried to get immersed into the storyline, the commentary pulled me away. The girls bicker about ‘you shouldn’t have added that’ and ‘I didn’t say/think that’. It wasn’t amusing, it was just annoying. It didn’t make the girls more real…it simply made them insufferable. And funnily enough, they all sounded more or less like each other. Their main differences were in their ‘special’ attributes…and their ‘fathers’.

She had only known them for a few days, but already they felt like family, as though they belonged together.
BEATRICE: As we do.
MARY: Despite our differences.
BEATRICE: Or because of them.

In short:
➜The characters were all flat: the characterisation relayed on the ‘names’ rather than actual character.
➜Everyone and everything that happens seemed a mere excuse as to be able to include all sorts of classic ‘monsters’.
➜The story was a sequence of similarly forgettable ‘adventures’. Lots of ‘coincidences’ helped the investigation…
➜The characters go from place to place, without paying attention to their surroundings.
➜The novel is orientated on the ‘investigation’ which didn’t offer any interesting scenes or anecdotes. It wasn’t surprising nor intriguing…Holmes and Watson are more or less caricatures…
➜Certain terms made the historical setting rather implausible. The funny commentary was not funny.

Mary’s blood ran cold in her veins.
CATHERINE: Now am I being melodramatic?
MARY: No […] but as a metaphor, it accurately describes how I felt at the time.

Goss’ seems to be ignoring her story and characters, favouring instead the opportunity to include as many different ‘cult’ monsters and characters into her novel, which is far too self-congratulatory.