The Ghost Fields by Elly Griffiths

“Stop!” shouts Nelson. “Police!”
In answer a bullet shoots past his ear.
“Ruth!” yells Nelson. “Get behind the duck.” 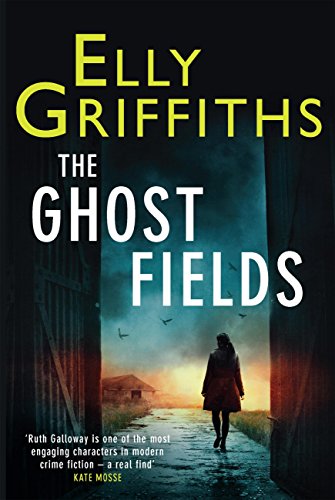 While I did find The Ghost Fields to be rather entertaining, it also made me realise that Elly Griffiths is not for me.
Maybe it’s down to the tone of her stories, which seem far from being the mysteries or crime stories that they are labeled as. The sort of humour that pervades the narrative in The Ghost Fields often came across as silly and out of place. More often than not it seems that the narrative makes fun of the characters, which made it difficult for me to take either them or their drama seriously.
Another thing that I disliked is the dichotomous portrayal of class: there is Ruth, a University lecturer therefore she lives cast off from other, throws literary or historical references, brains over looks etc…then we have Nelson who is a straight-talking policeman (who finds words such as feminism repelling) who dislikes the Blackstocks on sight (aristocrats…yuck!). We have the ‘eccentric’ Professors who talk only of their subject, the bitter aristocrats….everyone is either entitled or pretentious. Other characters are also rather one-dimensional: gym-bunnies, the kind pregnant woman, the self-assured American…it was hard for me to think of them as ‘people’ since they are merely stereotypes…that don’t even succeed in being amusing.
There is very little that would make this novel into mystery/crime. Yes, there is a body, and there are a few ‘detectives’ but it seemed to be more of melodrama: Ruth likes Nelson, Nelson has a wife but is jealous that Ruth is interest in Frank, Nelson’s wife is also interested in someone else. Drama alert!
Anyway, I still finished it so it wasn’t all that bad. It might be that Griffiths is simply not for me.