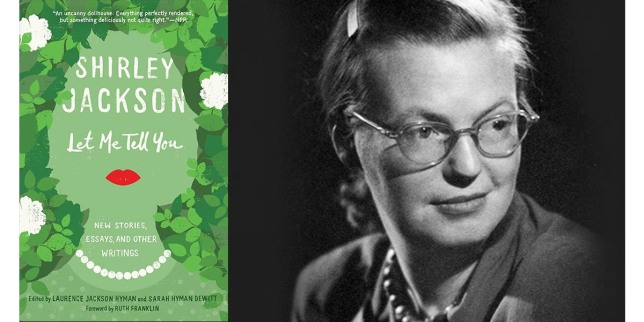 Let Me Tell You: New Stories, Essays, and Other Writings by Shirley Jackson
★★★★✰ 4 of 5 stars

I thought I was insane, and would write about how the only sane people are the ones who are condemned as mad, and how the whole world is cruel and foolish and afraid of people who are different. That was when I was still in high school.

Shirley Jackson is such a fantastic writer and Let Me Tell You: New Stories, Essays, and Other Writings showcases the wide range of her writing: from domestic —and relatively fictionalised— accounts of her daily life with her four children to unnerving short stories that are imbued with anxiety and paranoia.
Her sense of humour and her particular brand of surreality make their way in each one of her stories, regardless of the genre. Jackson handles ordinary occurrences in an extraordinary manner. It is often this fantastic mode that allows her to examine the darker side of human nature. Jackson exposes those vicious and malicious sentiments that hide beneath the surface of ‘respectability’; it is often those conservative and upright individuals that are capable of evil and violence. Jackson’s portrayal of violence is all the more disturbing because it often is so sedate: individuals can be ostracised and erased on the basis of a few whispered words or a look.
The short stories might not be Jackson’s best but they do explore those themes and images that appear in her full novels.
Jackson’s essays on writing are very insightful, especially when Jackson discusses certain techniques she uses in The Haunting of Hill House. Two of Jackson’s children provide a moving afterword.

My review of: We Have Always Lived in the Castle by Shirley Jackson

One thought on “LET ME TELL YOU: BOOK REVIEW”