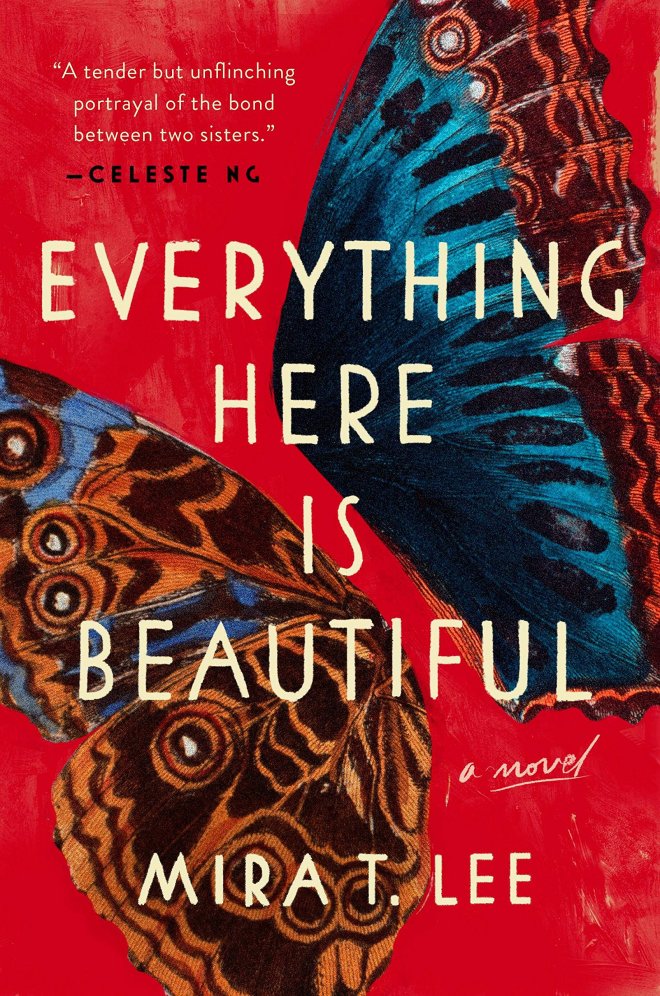 Everything Here is Beautiful: Book Review

Everything Here is Beautiful by Mira T. Lee

“Where are you? Where the fuck are you, Lucia?”

Being punched in the stomach would have been less painful than this.

Lee’s depiction of mental illness is both incredibly vivid and deeply disturbing. Lucia is the focal point of the narrative: she is a free-spirit, full-of-life, a romantic with a big heart. However in her early twenties, something changes. Miranda is in many ways the opposite of her younger sister Lucia and after their mother’s death, Miranda struggles to understand what exactly is happening to her once so happy sister.
Not only does Lee masterfully utilises different point of views in order to give all of her characters an ‘equal’ voice but she also gives us a glimpse of what an ‘outsider’ thinks of Lucia’s situation and of her friends and family. After a particularly severe episode Lucia is hospitalised and we see what the nurses and doctors think of Lucia herself, and of her loved ones (Miranda, Manny—Lucia’s boyfriend— and Yonah, Lucia’s husband).
Each point of view brilliantly renders the individuality of a certain character. The chapters from Lucia’s perspective (which could be both in 1st and 3rd person) were incredibly jarring. A series of staccato sentences, broken up thoughts and impressions, really made me feel what Lucia was experiencing. In spite of how disturbing this feeling was, it was hard to take my eyes away from Lee’s vivid prose.
Another thing that stood out to me was the way in which Lee describes different places and cultures. Each of the main characters has a rich and multi-layered background. And the people that orbit around the main ‘cast’ were just as distinctive. With only a few words Lee is able to imbue her characters with history, personality and realism.

“There’s a word for this in Portuguese: saudade. It’s not exactly nostalgia, there’s more of a longing in it, for a feeling or way of life that may be impossible to recapture—that may or may not have even existed in the first place. An indolent dreaming wistfulness is how I’ve seen one writer describe it. Now that’s a great word.”

The narrative traces Lucia’s life, and the way in which she attempts to escape from her diagnosis. Fearing the loss of her individuality, Lucia tries to reject labels and or diagnosis, which are presented to her as inescapable sentence. Those she cares for try in different way, and with different—if not terrible—results, to help her. More than once the characters and their narratives confront the increasingly blurred line between Lucia and her mental illness. Would Lucia still be herself if it wasn’t for mental illness? Is her personality a result of her schizophrenia? Where does Lucia begin and where does her disorder ends?

“Later, in hindsight, they would come together on this: to wonder when it had become impossible to distinguish which parts of Lucia fell under her own juridistinction and which belonged to her illness.”

Lee does not provides with an answer. In her portrayal of Lucia—and of mental health in general—she never resorts to a didactic or dogmatic explanations, but rather she lets her narrative—which follows different characters during different periods of Lucia’s life—relate how Lucia’s illness is perceived by her and those around her.

We could clearly see that Miranda has the best intentions and tries her best to help Lucia, yet, we can also see how Lucia and others might find Miranda ‘controlling’.
We could also see how Lucia begins to disconnect from her everyday reality and those around her. For example, she is unable to recognise Manny’s terror at being deported or Miranda’s own concern about trying to have a child of her own.
The relationships between the various characters are all too realistic. Misunderstandings can foster resentment and tensions. In spite of all of this pain and hurt, there are some truly beautiful moments of tenderness and compassion that convey the underlying love and affection between these characters.

“You could say: This is the way tow people drift apart.”

Equally harrowing and evocative, Everything Here Is Beautiful is a heart-rendering debut that really that really packs a punch.

“I try not to think about it. I don’t take it personally. People say things, people do things, these two are not the same, I know that. I hope she’s happy, that’s all.”

There are a lot of ‘disturbing’ and painful things: Lucia’s mental illness, how her diagnosis alienates her from her sister, what Lucia experiences during one of her psychotic episodes, what others feel in witnessing Lucia’s dangerous behaviour. And perhaps all of these distressing moments make those rare moments of calm and or peace all the more beautiful.

“When she wakes, she feels something inside her like a venom, a flare in her chest, a burning sensation just beneath her skin. The serpents. A thought flickers. She extinguishes it. When she slows her breath to listen, the air is quiet. It is only her.”