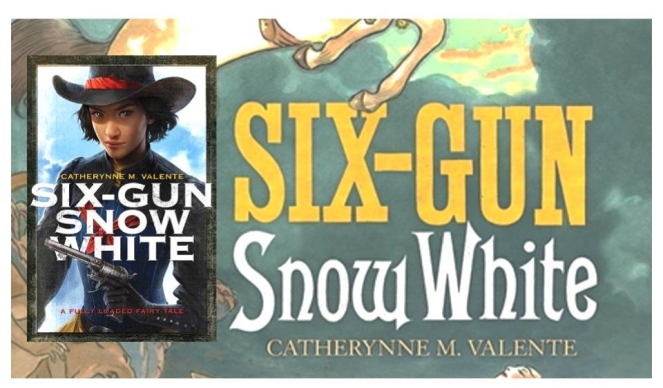 “She named me cruel and smirking, she named me not for beauty or for cleverness or for sweetness. She named me a thing I could aspire to but never become, the one thing I was not and could never be: Snow White.”

Valent has given a Western spin to an old European tale. I enjoyed the way in which Valente juxtaposes a gritty setting against her lush writing style, and it is almost unnerving the way she can describe horrible things in such a beautiful way. At times, I did find some scenes and metaphors to be gratuitously graphic.
The first part of this novella was really strong. It is narrated by Snow White herself and she recounts how her father married by force a Crow woman (her mother). The way he fetishes her beauty and appearance was truly sickening, and Snow White is always made to feel ‘other’ and ‘alien’ by her father and his servants .
Snow White’s mother dies and her father (Mr. H) marries again. His new wife (known as Mrs. H) begins abusing Snow White, pretending that she is ‘teaching her the ways to become a woman’. Altering physical abuse with a torrent of dehumanising insults and actions (she bathes Snow White in milk in order to make her skin paler) all of the things that Snow White is made to endure were hard to stomach.
The narrative switches to a third perspective which created a distance between the events of the story and the reader (me). There was almost a joke-y tone which went at odds with the Snow White’s serious narration.
The last part was really…pointless? The story comes across as meandering and unfocused. Characters have few (if any) layers, they share the same bland and unfixed personality, and our main protagonist, Snow White, seems quick to forget Mrs. H’s abuse and acts merely under the command of the narrative. What of her will? She is an accessory to her own story, an object rather than a subject.
All in all, this is the type of novella that carelessly tosses characters about, throwing one too many pointlessly extravagant (or occasionally grotesque) observations that have little impact on the overall story but only serve to distract me from the story’s action. The narrative favours the language over its plot or characters. The beautiful phrases soon become overindulgent and repetitive.
Great concept, poor execution.