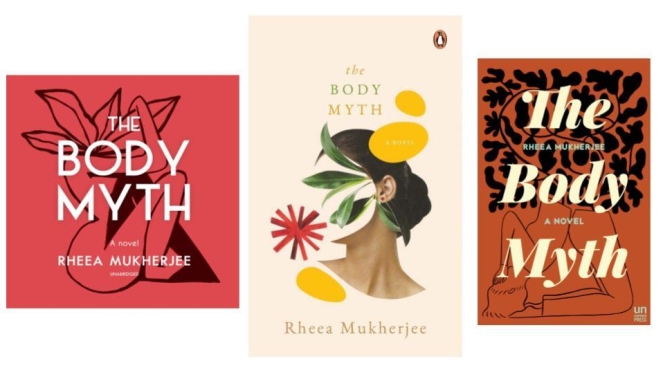 The Body Myth by Rheea Mukherjee

“Perhaps they had done this before. Perhaps somewhere in this house were the remains of a broken heart, another widow who fell for their charms only to have her spirit shattered.”

One word: Weird.
And not necessarily a good kind of weird.
This short novel strikes me as being confused: it doesn’t know what it wants to be.
Somehow it seemed that this novel was less than the sum of its parts.

“We didn’t possess the exact same background to grid our foundation, but we were similar enough to dance to the tune of happy urban complacency.”

I was intrigued by the opening chapter, which throws us immediately in this midst of this not-quite-love triangle. Our narrator Mira is a recently widowed English teacher. After a brief stint in a hospital, Mira is quite content to live by herself, unwilling to form meaningful connections, let alone seek a new husband.

“If I’d lived in the Victorian era, I would have been dismissed as a fragile woman who suffered from hysteria because her husband just died. Or if I had lived a century before in my own country, my depression would have been glorified, needed, and aggressively presented to society as that of an ideal grieving wife. Had the words clinical depression empowered me? I couldn’t remember.”

Enter Sara and Rahil. Mira comes across the couple after she sees Sara having a seizure in a park. After they invite her to their house Mira becomes entranced by the couple. Beautiful Sara suffers from a long list of mysterious ailments, and Rahil dotes after her.
Yet, Mira immediately suspects that Sara might not be as ill as she claims to be, or that perhaps Rahil is behind Sara’s illness.

“She had listed off her diagnoses with a building pride, which unsettled me but compelled me to believe her, to believe that there was something very wrong with Sara, something even science couldn’t account for.”

I enjoyed Mira’s cynic narrative. At times, I did find that her actions were at odds with her inner monologue. She seemed two different people. Around Sara and Rahil she acts in such a wimpish way. I found her commentary on love, marriage, and teaching, deeply entertaining and in comparison her so-called ‘complex feelings’ for Sara and Rahil were…not that complex? I never quite understood her fascination with Sara or her relationship with Rahil. Sara seemed more ‘object’ than person, and yet the narrative implies that she is a deeply profound and thoughtful woman.
There are a lot of quotable scenes or monologues but the writing did seem to try too hard to come across as sardonic, so much so that, other than the occasional ‘ha-ha‘ or ‘that sounds clever’, I experienced very little while reading this.

“Although I will say, contemporary Indian English fiction is shit, and India has yet to create its first Kafka.”

What could have been an intriguing tale of passion and jealousy delivers a lukewarm and predictable depiction of the typical ‘love’ triangle (and in this case the love seems…underbaked? Not quite believable? Not at all there?!) Mira talked a lot but felt things in a monotone sort of way. Her jealousy and lust, even her relationship toward her father and her job, were all just underwhelming and flat. In her narration she presents herself as this intelligent and deep individual but ‘telling’ isn’t enough. I saw little of this inner depth and of these complicated feelings she harbours for this married couple. She is just so passive, in spite of those occasional sharp observations.
The story seemed to promise more than what it actually is. Sara and Rahil are so lifeless. Sara’s love for Sufi music didn’t make her interesting or layered. Rahil spoke few words, and acted in such a vague manner that I had a hard time believing in his character.
The whole ending seemed at odds with the beginning. What was all that for? A few well written paragraphs do not distract from a hazy and poorly constructed story.