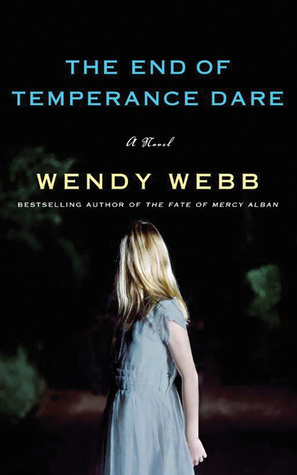 The End of Temperance Dare by Wendy Webb
★★✰✰✰ 2 stars

I was hoping that this would be a ‘guilty pleasure’ of sorts or a cozy Gothic story…I wasn’t prepared for such a cheesy and badly written story. This book was unintentionally funny.
The start of this novel was interesting enough, and the first few chapter showed potential.
Soon, however, I started to notice a few things that ruined any possibility of my liking this novel.

✎ THE WRITING
I don’t like to be too critical about someone’s writing skills but here there was an abundance of cringe-worthy descriptions and phrases which seemed to belong to a piece of fanfiction I wrote at the age of 14, which was far from great (quite the opposite in fact, it was terrible, my main character was perpetually ‘narrowing’ her eyes…something which Eleanor does as well).
-The main character repeatedly ‘winces‘ at her own thoughts (wince appeared in different forms—ie. winced, wincing—for a grand total of 25 times)
✖ Characters were squinting so much that I started thinking they were all having some sort of attack or that they all need to go to specsavers and get some glasses (the squinting count is up to 50, I kid you not)
✖ There were those cheesy he/she ‘smiled a sad smile’, ‘smiled a broad smile’ or ‘smiled a warm smile’
✖ ‘I let out a breath I didn’t realize I was holding’ appears twice (once isn’t good, but twice? Really?)
✖ Talking of breaths, the main character takes approximately 20 ‘deep breaths’ (I get that she is scared and trying to calm herself down but we don’t need to know that she is trying to slow her breath down every single time…)
✖ The men in this book kept scowling, winking and they must be mutants or walking torchlights since they keep ‘flashing’ their eyes and grins at the main character.
✖ In one scene Harriet ‘pipes up’ 3 times. W-H-Y

✎ NONSENSE
✖ The whole thing was incredibly ludicrous. Really? I’m supposed to feel satisfied by such a hackneyed plot? Nothing much happens but after seeing a creepy dollhouse the main character is convinced that the place is haunted. Sure.
(view spoiler)[Shouldn’t the people who were not possessed warned her? Shouldn’t she have asked them directly what they knew about the Dare sisters? (hide spoiler)]

✎ CHARACTERS
✖ It took me awhile before I realised that the main character is supposed to be around 40. She behaves and sounds like a teenager with no experience whatsoever. She keeps telling us that she used to be a crime reporter but I just couldn’t believe it. Her character has no history, no substantial past. She seems a barely formed being with no foundations beneath her surface. Her stupidity was infuriating, nearly as much as her habit of blushing when in the vicinity of a man. She is a pantomime. When she has a bad thought she ‘shakes [her] head, as if to shake the feeling away’ and she isn’t capable of thinking things through or of articulating a thought that isn’t related to her attraction to two random men.
✖ The other characters do not speak or behave like people. They seem like play-acting children.

✎ ROMANCE
Hilarious.
Eleanor is surprised by her instant attraction to two different men: ‘I truly didn’t know what to make of my attraction both him and X’. She has to tell herself that she can’t like them since she ‘had just met’ them (she has this thought often). They both start calling her Norrie hours after their first meeting.
And then…this happens:

“There was an energy, a sense of magic that vibrated in the air around us, my body vibrating with it. My peripheral vision blurred as thought the room had fallen away, disintegrated into dust, and there was nothing in the whole world except [his] eyes.”

I have a limit for cheesiness…

✎ GOTHIC
Where?!
I hope that the main character isn’t called Eleanor as an homage to Eleanor from The Haunting of Hill House…there were a few moments which seem ‘borrowed’ from Hill House. Mmh.

This book strings together the most glaring clichés. From the corny writing style to the sloppy romance…it was just bad.