Where the Forest Meets the Stars : Book Review

Where the Forest Meets the Stars by Glendy Vanderah 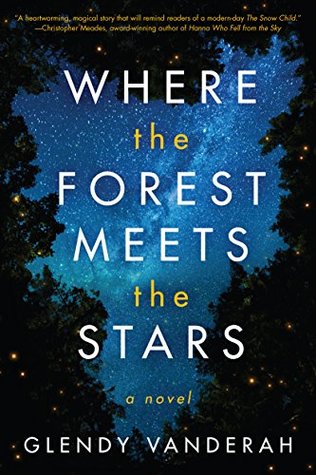 If I could just rate the first 30% of this novel I would have given this 4 stars. Sadly, I found the depiction of depression and social anxiety to be lousy and, worse still, I thought that the romantic relationship between the two leads is…worrisome.

Initially I was enjoying this story. In spite of the main characters’ troubled pasts (Ursa, a child who shows signs of abuse, claims that she is an alien researching human beings; Jo is finally finishing her PhD after the death of her mother and having survived her own breast cancer—from which she is still emotionally and physically recovering; and Gabriel, a young man who sells eggs by the side of the road) the story seemed light-hearted. Jo and Gabriel begin to get to know each other thanks to Ursa, together they eat marshmallows, watch birds, go for a swim. I sort of understood why Jo and Gabriel didn’t drag Ursa to the police. They worried that she would run away, or worse end up back in a potentially abusive home. They do check missing children websites and early on Jo does end up calling the police. I didn’t mind that they were being somewhat irrational…I thought this is a fluffy, feel-good read, why would I want things to be too realistic?

For me things changed when the story begun focusing on the romance between Jo and Gabriel. Jo had initially dismissed him as ‘egg man’, but soon they realise that they have a lot in common.
What bothered me is that Jo seems suddenly interested in Gabriel. On the basis of this new ‘interest’ she feels that she can push her way into his private life. After he tells her that he suffers from social anxiety and depression she forces him to ‘get out of his shell‘. She pesters him, believing that someone can just ‘snap out’ of depression, tells his mother of their relationship (does one kiss institute a relationship?) when he clearly was not comfortable with her doing so (she pushes past him, goes into house, and reaches out for Gabe in front of his mother: “captur[ing] him around the waist before he got away”), when he admits that he has never been kissed, rather than giving him time, she kisses him: “His body was radiating heat—and maybe fear. He recoiled a little when she put her palms his chest.”
Gabriel doesn’t like the way his face reminds him of his father and Jo thinks that she can ‘snap him out’ of his anxiety and self-consciousness by shaving his beard when he clearly tells her he wants to keep it. She coaxes him by saying that she loves “a clean-shaven face’ and by bringing in Ursa, asking her “Don’t you think he’d look handsome?”. When he says that “nope”, “no”, and “I don’t want to see his face every day!” Jo ignores his wishes, kisses him and asks: “Don’t you want to be irresistible to me?”
They’ve known each other for what, two weeks? The day after their first kiss and bang! Jo waltzes into his private life, dismissing his trauma, his boundaries and his mental health,. Because she has survived cancer she thinks that she understands all illnesses and traumas. The story, rather than showing how harmful and emotional manipulative Jo is being it shows us that it works! Gabe is cured! Apparently true love cures depression. Who knew.
If Jo was a man and Gabe was a woman this relationship readers would find that it is unhealthy, and that Jo’s behaviour fringed on being emotionally manipulative. But Jo is woman so the way she treats Gabe is ‘okay’.

I was so angry at Jo that I became disconnected from the narrative. Ursa seems largely forgotten, relinquished to the sidelines, and is only given a few silly/cute lines. When the truth behind her identity is revealed it seemed over the top. The ending was laughably neat.