In Beautiful subverts fairy-tale storylines by making her heroine a troll princess. Hulde is in fact the sole daughter of a tyrannical queen who terrorises those around her. In spite of its title, the story is not concerned with beauty: Hulde knows that humans are afraid of her. Trolls are seen as hideous creatures and throughout the course of the story’s three acts Hulde will have to reconcile herself with her appearance and her position as (view spoiler)[queen (hide spoiler)]. 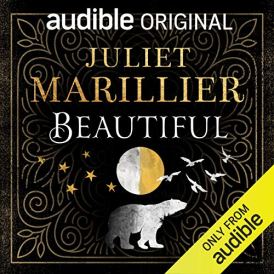 I’ve read many of Marillier’s books and it was refreshing to read of a protagonist who isn’t stereotypically beautiful. I also like the way bravery is what Hulde aspires to, rather than beauty. She constantly tries to better herself and ultimately learns that to be brave also entails trusting others.
Marillier pays particular attention to storytelling itself and in her adventures Hulde often draws strength from old tales of brave heroes and heroines.
Although this was an enjoyable read, with some interesting takes on certain tropes, I found the story to be less complex than some of Marillier’s other novels…perhaps because this is an audible original so Marillier kept things ‘simple’ for this type of format or maybe because this was the spin-off of a short story she’d written…longtime fans of Marillier might find this story to be less layered than her usual.
Still, this is a short audiobook and makes for a short and entertaining read.