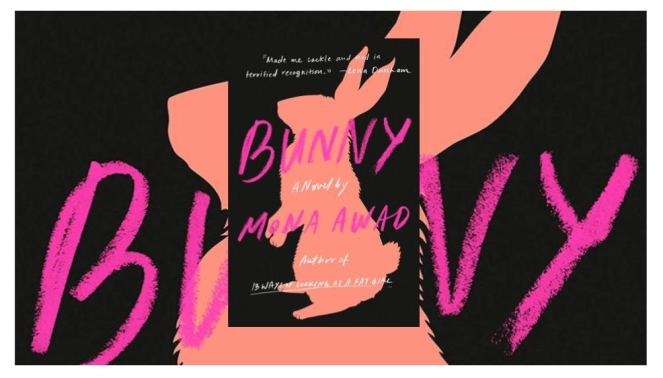 There are those bizarre and experimental books that manage to be entertaining, transgressive, and on occasion even thought-provoking. And then, there are books like Bunny whose weirdness largely rests on overusing the word bunny(which appears approximately 350 times, one time too many).
An intentionally silly story that owes more to Scream Queens and The Babysitter then Heathers or Mean Girls. If you are picking up Bunny thinking that it is some sort of intriguing campus novel, you should reconsider given that this book is the anthesis to The Secret History. If you are hoping for some sort of absurdist black comedy à la Yorgos Lanthimos, think again. The ‘satirical horror’ I was hoping to encounter in Bunny was closer to the ‘comedic horror’ in the Scary Movie franchise…

Writing about writing is never an easy endeavour since there is the high risk that you will remind your readers that they are indeed ‘reading’ a fictitious work. Since the main cast in Bunny is part of a creative writing MFA program…we were constantly reminded of how inane criticism can be. The five girls part of this program are apparently only able to write fiction that reflects their personal life or preferences…funnily enough, a lot of the criticism that these characters throw at each other’s pieces of writing could easily be aimed at Bunny (oh, the irony):

“Um, what the fuck is this, please? This makes no sense. This is coy and this is willfully obscure and no one but [the author] will ever get this […] spoiled, fragmented, lazy, pretentious […] And then I feel like screaming JUST SAY IT. TELL ME WHAT HAPPENED. TELL ME WHAT THE FUCK THIS MEANS AND WHAT YOU DID WITH HIM EXACTLY.”

Four of these girls are part of a clique that is the ultimate parody of cliques. From the first few pages they are presented as some sort of ‘hive-mind’, some sort of multi-conscious entity. Some of their conversations between them—as well as the narrator’s observations about them—could be amusing.
Although the narrator keeps insisting that she is ‘different’ (aka the only ‘big’ difference between her and the bunnies is her finances) she falls prey to this clique. Personally, I don’t think the story provides with a convincing reason for the MC to fall in with these girls. Even when the Mc sees their most secretive activities…it seemed that she stayed with them out of laziness (or merely as a way to further the plot).
The weirdness of this story seems contrived. This whole novel seems (rather ironically) like an exercise for a creative writing class. Many of the ‘bizarre’ elements in this story were predictable and had me rolling my eyes. The whole book is like a joke that goes on for too long. The first few chapters were amusing and the scenes that took place in the creative writing workshop were on point (and reminded me of the creative writing module I took in my first year of uni):

“Samantha, we’re at Warren. The most experimental, groundbreaking writing school in the country. This goes way beyond genre. It subverts the whole concept of genre.”
“And gender narratives.”
“And the patriarchy of language.”
“Not to mention the whole writing medium.”
“It basically fucks the writing medium, Samantha. Which is dead anyway, you know?”
“Exactly. This is about the Body. Performing the Body. The Body performing in all its nuanced viscerality.”

Yet, soon enough the repetitiveness of these exchanges grew tiresome and the style of the narrative became increasingly annoying and unnecessary. The narrative mimics the language—and perhaps vision—of this clique of girls: it is sweet, sticky, and extra. If you like eating candy floss until you feel sick you might be up for it…the narrative—if not the whole story—is a parody that lacks subtlety or real wit:

The narrative’s style was so repetitive! All too frequently words were repeated three times in a row in a cheap attempt to give urgency to the story.
The plot (if we can call it that) even in its ‘wtf moments’ is tedious. The characters and story seem merely a backdrop to this sickeningly sweet and repetitive language (hair like feathers, tiny pink-y small-ish hand, glossy this and that, teensy-weensy girls who eat teensy-weensy food).
This book didn’t inspire feelings of panic or fear, which I was expecting given its summary…I was never afraid of these demented girls and their stupid activities. A lot of the things seem to just happen to the MC as if she isn’t capable of these laughable ‘terrible’ things from happening (insert eye roll here). Again, I find it ironic that the MC’s own writing is criticised for this exact reason:

“Although we could hardly call her a heroine, could we? I mean, could we even call her that, Samantha? […] She’s quite passive, Samantha, isn’t she?”

I guess you could argue that this is all ‘intentional’. The stupid characters, the saccharine and repetitive language, the MC’s spinelessness…these things come across this way on purpose…but that seems like a cheap excuse to make the lazy and unfunny elements of your story ‘deliberate’.
The worst ‘sin’ of all is that this book leaves us with a less than favourable opinion about writing and criticism…which isn’t a great message.