The Prisoner of Heaven by Carlos Ruiz Zafón — book review

After finishing The Angel’s Game I was eager to start The Prisoner of Heaven as I was hoping that we could see how unreliable a narrator David was. 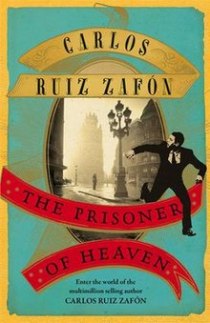 Tonally The Prisoner of Heaven is closer to the first book in this series, yet its short length and fast plot-line seemed more in a line with those of a short story or a novella. While The Prisoner of Heaven was a bit too long for my liking, and its story ‘dragged’ a little, I had the opposite problem The Prisoner of Heaven as I found myself wanting the story to slow down a little.
The story follows once more Daniel who is now married to Bea and has become a father himself. A figure from Fermín’s past will bring to light some old secrets and a not unsurprising connection between Fermín and David.
While I was interested in Fermín’s backstory I did find the Bea side-story to be a bit of distraction, one that did not really contribute to the overall story. When things seem to be getting into motion the story ends which did lessen my overall enjoyment.
Still, in spite of these reservations, Zafón—perhaps thanks to his translator—remains a good writer, even if he occasionally spends too much time on silly jokes.