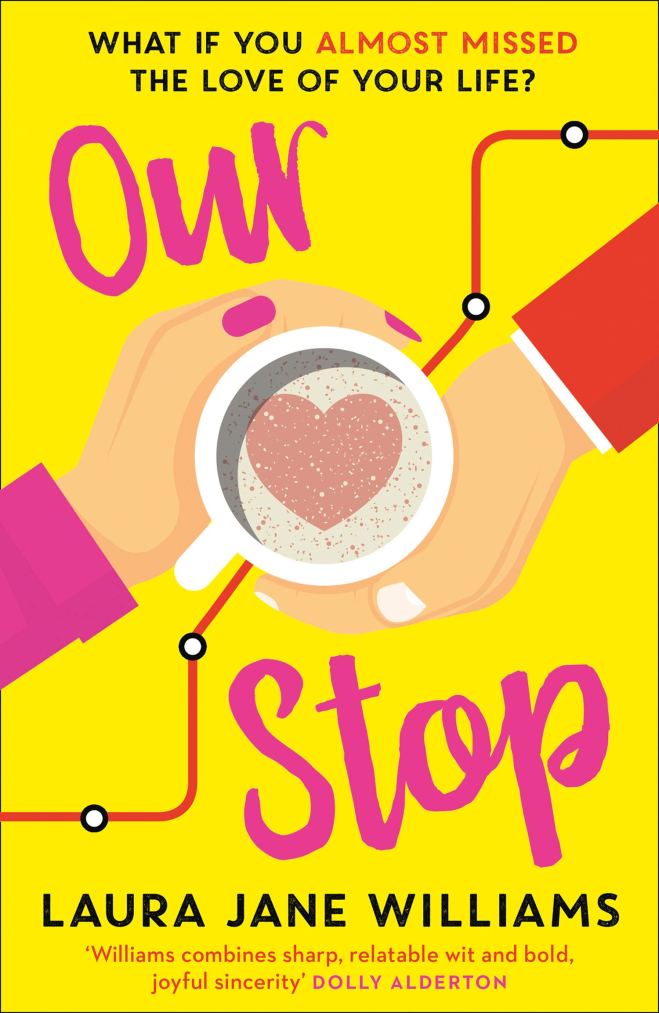 While Our Stop may have made me smile me smile, once or twice, it mostly frustrated the living daylights out of me.

Our Stop implements a similar gimmick as quite a few other romances: from new book releases such as The Flatshare—where the two leads develop feelings for one another through post-it notes—to the classic You’ve Got Mail…
In Our Stop Nadia and Felix develop romantic feelings for each other by carrying a sort of conversation, if not flirtation, in the Missed Connections section of a daily paper.
The premise is cheesy enough but I was ready to overlook it and enjoy the book as a light summer read.
Sadly, Felix’s approach of Nadia is definitely creepy…

Felix first sees Nadia on his 7.30am Northern Line tube, taken by her he occasionally even overhears her conversations (and later on remembers something she said in one of these ‘listening in’ occasions and believes that he knows her merits on the basis of said conversations). Too shy to approach her directly, and knowing that if he were to do so she would peg him as a weirdo, he opens up about his feelings—or should I say attraction as it is hard to believe that he developed anything more than a infatuation—in the ‘Missed Connections’.
As luck would have it a friend of Nadia reads this and recognises that “the cute girl with the coffee stains on her dress” is none other than Nadia! Quelle surprise! While Felix knows that Nadia is young and good looking, those are in fact the two main reasons why he is so taken by this stranger, Nadia has no way of knowing that Felix is actually who he claims to be.

I was once again ready to overlook this but the story ends up being way preachier than I’d expected….which is a tad incongruous given the whole meet cute/rose-coloured romance premise of the book. If you want to write a fun and gooey romance go on…but then maybe you should avoid going on and on about how your female lead and her besties are real feminists (and why is it so hard to find a good-looking guy who is touch with his feelings and doesn’t think that talking about what he feels with his male friends is gay) while showing us that your male lead is not like other men as he is a romantic, a good son, and knows all about consent, in fact, he would actually tell his walking stereotype of a ‘guy’ friend (you know the one who says things like ‘bro’ and ‘dude’, sleeps around, and says stuff like ‘whatever man’) that a very drunk girl can’t possibly consent to sleeping with him.
Maybe if these hot—or as they say nowadays ‘woke‘—topics had been handled with a bit more care and in a more convincing way, I wouldn’t have been as annoyed. Having your female characters say time and again “we are feminists” doesn’t make into actual feminists. Why do you have to acknowledge that they are indeed feminists? They are in their twenties, they have good millennial jobs, they live in London…your readers will assume that they are without the need for the author to use her characters as her own mouthpieces. I’m starting to get tired of these ugh-men books that have millennial women, so called woke-feminists, lamenting on why is it ‘so hard’ to find a uber-woke attractive man? Are all men bad?!
And why carry this sort of discussion in a book that has the male lead observing, and worse still obsessing, over a young woman he has glimpsed a few times on the tube?

Nadia allegedly develops feelings for Felix through his messages on the paper…she feels drawn to this unknown man (she immediately believes that he is just a normal guy rather than a creepy stalker) because he likes her and has publicly announced his interest in her. Feminism 1:1.
It seemed that Nadia develops feelings for Felix merely because they have yet to meet (so he remains the ideal man in her mind) and because twitter users are rooting for them…and maybe because she loves You’ve Got Mail…these are all very good reasons, not.
Funnily enough both Nadia and Felix are often helped by their friends when they write to each other…so that their messages are not entirely theirs. Which is why I had a hard time believing that Nadia is in love with this mystery guy aka Felix rather than the messages he writes with the help of his friend and that do not truly reflect his identity.

Maybe I wouldn’t have been so critical of this book if the story hadn’t been so desperately trying to come across as in and ‘up with the times’.
Another grating thing was that nothing much happens between the two. They have both side-plots through which the author can address certain ‘woke’ topics), they try and fail to meet (view spoiler)[until the very end of the book (hide spoiler)], they have overly awkward conversations which should have been a source of humour but merely seemed over-the-top attempts to make us sympathise with these very realistic characters, and they both have another possible love interest.
To top it all of the succession of near misses was impossibly annoying…

I think if I’d read the book myself, rather than listening to the audible version, I would have left this unfinished.
If I were you I would find a less preachy and more genuine romance (especially since there is very little ‘romance’ to be found in this book).