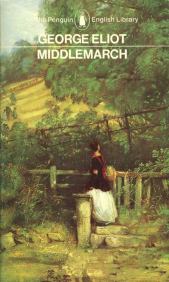 While I won’t be the first or last reader to address the lengthiness of Middlemarch I do think that it’s worth noting that yes it could easily have benefited from a little ‘trimming’. Still, if you can move past its rather daunting size hopefully you will be able to appreciate George Eliot’s elegant and deeply attentive prose as much as I did.

“One morning, some weeks after her arrival at Lowick, Dorothea—but why always Dorothea? Was her point of view the only possible one with regard to this marriage?”

Throughout the course of its lengthy narrative Middlemarch questions the ethics and moral principles of its characters, urging its readers to interrogate their own judgement and previous assessments regarding individual behaviours, whole institutions, and social conditions. Woven through the various storylines, that are running parallel to one another in Middlemarch, there are many thoughtful discussions and reflections regarding marriage, politics, science, faith, and class. 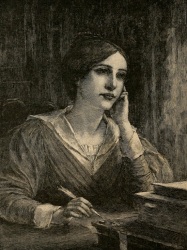 Like its full title suggests (Middlemarch, A Study of Provincial Life) the novel is primarily concerned with the lives and opinions of the inhabitants of Middlemarch. Within this small town many find it difficult to uphold their own boundaries, and their freedom and happiness are often hindered by the prejudices and jealousies that characterise provincial existence such as theirs.

In their separate ways both Dorothea and Lydgate—the main two characters of this novel—wish to enact some sort of change in Middlemarch. Yet, their attempts are far too progressive for the relative conservative and close-minded neighbours.
Lydgate methods are regarded with suspicion so that slowly but surely he becomes ostracised from his community. Perhaps his status as a ‘new arrival’ to Middlemarch is the cause of the people’s distrust of him and his ‘innovative’ methods (his aversion towards prescribing prescriptions is misconstrued to the extent of being regarded as a sign of medical malpractice; his keenness to get his hands on a ‘corpse’ seems uncivil). His close association Nicholas Bulstrode further antagonises the people of Middlemarch against him.
His marriage to Rosamond Vincy occupies a significant part of his storyline and reminded me very much of another literary unhappy marriage. Similarly to Dr. Charles Bovary, Lydgate enjoys his work but isn’t well regarded by others. Rosamond struck me as a less fleshed out version of Madame Bovary: she is vain, frivolous, solipsistic, constantly afflicted by ennui, increasingly indifferent towards her husband’s woes, and harbours aspirations towards a more grandiose lifestyle. While Lydgate is by no means flawless I felt quite annoyed that the narrative sometimes presented Rosamond as a victim of sorts.

Dorothea’s obsession to do good (one could even call it her raison d’être) is perceived by others as excessive and of bad taste. Dorothea seems to have aspirations to achieve the saintly status and stature of stature of a figure like Saint Theresa. Feeling like a saint without a cause she goes for the next best thing: similarly to Milton’s daughters, whom she fervently admires, she wants to help a brilliant man in his writing.

“Now she would be able to devote herself to large yet definite duties; now she would be allowed to live continually in the light of a mind that she could reverence. This hope was not unmixed with the glow of proud delight—the joyous maiden surprise that she was chosen by the man whom her admiration had chosen. All Dorothea’s passion was transfused through a mind struggling towards an ideal life; the radiance of her transfigured girlhood fell on the first object that came within its level. The impetus with which inclination became resolution was heightened by those little events of the day which had roused her discontent with the actual conditions of her life.”

Her dedication to her old and callous husband, as the narrative points out, verges on reverence. She seems blind to his flaws and to the possibility that his work will not be anything other than a product of a genius mind. Similarly to many other heroines (Samuel Richardson’s Clarissa comes to mind) she seems more than willing to live a life of martyrdom, of becoming some sort of 19th century reincarnation of Joan of Arc.
To me it seemed that Dorothea’s interest in her husband’s work was an attempt to live a more meaningful and intellectually stimulating life vicariously through him. Sadly for her Casaubon is not interested in sharing his ‘genius mind’ with her, and more than once rejects her kind offers to be of assistance to him. His failing health makes him all the more selfish and vindictive. Yet, even as Dorothea’s hope for a more fulfilling existence dwindles she seems unable to cast any blame on Casaubon choosing instead—as the good martyr that she is—to endure the disappointments of marriage with ubiquitous affability, and her affection and devotion to Casaubon will remain almost unaltered.

“Marriage, which was to bring guidance into worthy and imperative occupation, had not yet freed her from the gentlewoman’s oppressive liberty: it had not even filled her leisure with the ruminant joy of unchecked tenderness. Her blooming full-pulsed youth stood there in a moral imprisonment which made itself one with the chill, colorless, narrowed landscape, with the shrunken furniture, the never-read books, and the ghostly stag in a pale fantastic world that seemed to be vanishing from the daylight.”

In spite of the slowness and vastness of the narrative Dorothea and Lydgate do not seem to undergo any signifiant character change but rather they seem to remain true to their beliefs however misguided these may be. In only one instance Dorothea seems to show awareness of her unhappy marriage with Casaubon while Lydgate is forced to leave Middlemarch not for the want of trying but due to external circumstances.
Running alongside Dorothea and Lydagate’s narratives are the ones concerning other inhabitants of Middlemarch among which are the Vincy family, the Garth family, Nicholas Bulstrode, and Camden Farebrother. Some of the characters, such as the Cadwalladers, seem to function as a chorus, gossiping and interrogating the actions of the central figures of the narrative. Yet their role is not a minor one as it is up to the ordinary people of Middlemarch to sway and derail our main characters’ storylines.
There are free-spirits such as Will Ladislaw who seem to function merely as the ‘wild-carefree card’ that—being an outsider in more ways than one—isn’t as affected by Middlemarch’s petty politics and prejudices. His deep infatuation with Dorothea diminishes somewhat this liberty of his.

“I have never done you injustice. Please remember me,” said Dorothea, repressing a rising sob.
“Why should you say that?” said Will, with irritation. “As if I were not in danger of forgetting everything else.”

While I wasn’t entirely sure why Will falls for Dorothea in such a way their slow (read: very slow, incredibly slow) romance made for some of the most tender and heartfelt moments of the whole novel. Speaking of heartfelt scenes, I was pleasantly surprised by the one that takes place towards the end of the novel which stars Dorothea and Rosamond (two characters then until that point had not shared any meaningful heart-to-heart).

“Rosamond, taken hold of by an emotion stronger than her own—hurried along in a new movement which gave all things some new, awful, undefined aspect—could find no words, but involuntarily she put her lips to Dorothea’s forehead which was very near her, and then for a minute the two women clasped each other as if they had been in a shipwreck.”

Many of the characters’ have to contend with their personal weaknesses: there are those like Fred Vincy whose spindrift ways will alienate—with the exception of his mother—those around him, Lydgate’s pride will lead him to refuse time and again the help of others, while Dorothea’s devotion towards her husband will jeopardise her own chance at love and happiness.
The narrative contends with the politics occurring in a provincial town in the 1830s, incorporating historical events and decrees within its various storylines.
The resulting effect seems close to that of a painstakingly realised tapestry representing the most trivial aspects of a ‘provincial life’. Elliot contends with questions of ethics and morality by confronting her characters with various setbacks and challenges. Money seems to be a running topic in each of her characters’ lives: there are the ones who have too much for their liking, such as Dorothea, and the ones who find themselves ruin their reputations and their relationships with their loved ones for it.
While I didn’t feel particularly sympathetic towards the novel’s various characters (I despised Fred’s entitled whininess and found his portions of the story to be intolerable; Dorothea and Will seemed far less interesting and intriguing that what other characters make them to be) I loved George Eliot’s writing. She could create such beautifully articulated insights and observations as to make even the most ordinary of conversations or landscapes something of interest. Her calibrated style brought her characters to life:

“Every nerve and muscle in Rosamond was adjusted to the consciousness that she was being looked at. She was by nature an actress of parts that entered into her physique: she even acted her own character, and so well, that she did not know it to be precisely her own.”

While much of the narrative concerns matters pertaining to a particular moment of time, there were many instances in which Eliot’s writing and narrative seem to transcend the limitations of their time. Throughout her novel she adds many remarks and details as to make her story all the more vivid in the readers’ mind: by specifying the tone of one’s words (“”Rosy!” cried Fred, in a tone of profound brotherly scepticism.in a tone of profound brotherly scepticism”) or ones movements and gestures (“”No,” said Will, shaking his head backward somewhat after the manner of a spirited horse”) she makes her characters and mannerisms all the more real.
Moments of humour are often made at the characters’ expenses. For example the narrative will address the characters as ‘poor’ as they are deeply involved in experiencing moments of personal anguish or self-commiseration. There are also some interesting insults and reproaches that could be surprisingly funny. For example Lydgate calls his wife a ‘basil plant’:

“He once called her his basil plant; and when she asked for an explanation, said that basil was a plant which had flourished wonderfully on a murdered man’s brains. ”

The narration was surprisingly innovative in that it seems to switch from a removed third-person perspective to a vigorous first-person one. The awareness shown by the narrative acquires an almost metafictional quality as it questions the traditional structure of the ‘novel’ and the representation of its characters as the ‘heroes’ and ‘heroines’ of their own stories.
One of the setbacks of this novel is its length. Perhaps if I’d found the characters more compelling I wouldn’t have minded as much but as it is they often frustrated or bored me so I don’t think I’ll be re-reading this anytime soon.