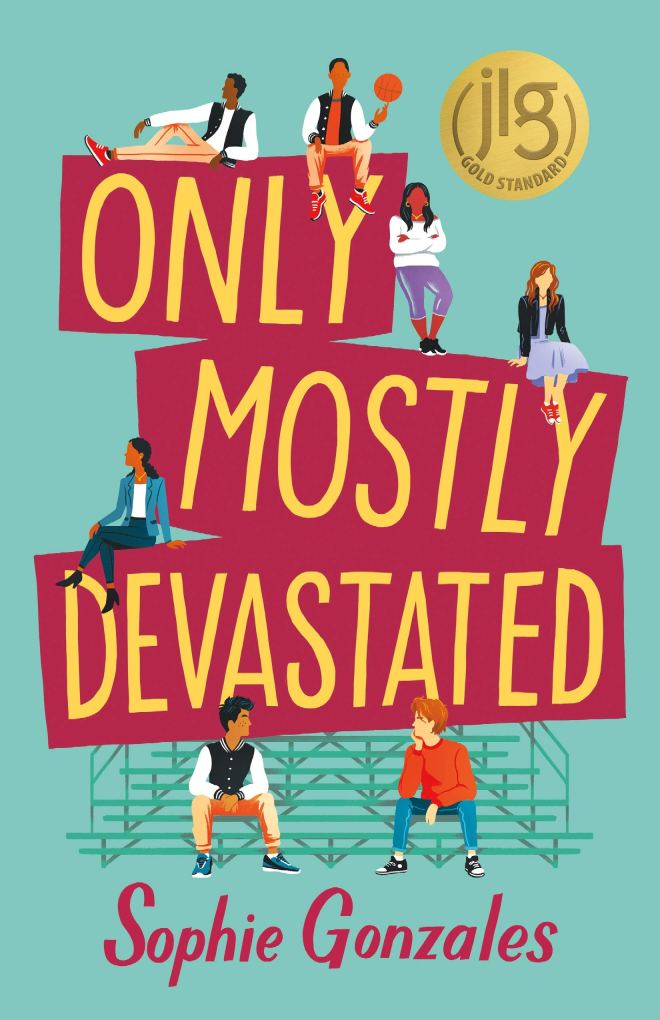 “It was late afternoon, on the very last Wednesday of August, when I realized Disney had been lying to me for quite some time about Happily Ever Afters.”

Only Mostly Devastated tells a cute but extremely formulaic story that is as memorable as a teen coming-of-age movie (possibly of Netflix variety). I really wanted to enjoy this but I found the story to be unimaginative, the plot is uneventful and, with the exception of Ollie and Will, every single character struck me as being little more than a stand-in for a certain issue.

Positives
✓ Sophie Gonzales’ simple writing style effectively conveys Ollie’s various thoughts and experiences. Rather than loosing herself in a purply metaphors Gonzales has opted for a more direct and plain prose and this first-person narrative is perhaps the most accomplished aspect of Only Mostly Devastated. Ollie hooks readers in, right from his opening lines, and keeps us entertained and engaged throughout the majority of the novel.

“Thankfully, Mom and Dad raised me to aim low, to encourage a healthy contentment in hitting par.”

Ollie’s is an amusing narrator. He is fairly awkward, very sweet, and has a lovely sense of humour. He shows self-awareness and self-respect (two things that are often MIA in a YA main character). While he does use acronyms (I had to google D and M) and makes plenty of references to popular culture, these were well incorporated into the narrative (they didn’t come across as just random insertions). If anything they made him into a believable teenager.

“A week later, and I was still getting lost more often than the girl in the Labyrinth movie, except I didn’t even have David Bowie in tights as a reward for my efforts.”

✓ The Grease-inspired story had potential. This ‘Will isn’t the same after the summer’ scenario created a good amount of tension and angst. Ollie is confused and hurt by Will’s change of character (from a sweet and sensitive boy into an obnoxious class clown who doesn’t want to be seen with Ollie).
✓ The relationship between Ollie and Will was well developed. While Ollie doesn’t excuse Will’s behaviour (“I’m a dick because I’ve always been a dick around my friends wasn’t really an excuse.”) he doesn’t pressure him to make their summer romance public knowledge. Ollie, quite rightfully, finds it intolerable to be someone’s ‘dirty secret’, yet he also understands the difficult position Will is in (“No one deserves to be outed against their will.”). In spite of their disagreements and different attitudes, readers can see just how much they care for each other. They share many tender moments and I thought that their ups-and-downs were very realistic.

Negatives
✗ The storyline starts well enough but soon fell into a predictable path. We have a certain number of subplots following Ollie’s friends and his aunt which were so thinly rendered as to have little impact on the overall story.
✗ Ollie’s friends and his aunt seemed to exist only so that the novel could address certain hot topics. Sadly these characters were reduced to the issues they were contending with. Take Ollie’s new friends: they just happen to be the three people he gets to know on the first day. One is there so the novel can include a hurried, and extremely superficial, discussion on body positivity. She has few lines and they mostly have to do with her appearance/body/diets+exercise regime…her personality was mostly non-existent. She was defined by this subject matter. Another one of his new friends (the girl who decides to nickname our protagonist Ollie-oop on the very first day…who does that?! Someone from Riverdale?) exists so the story can include an ‘its okay to fail/keep trying’ message. And then we have the girl who had the potential to have a more defined personality (not a good one but still) ended up being portrayed as a rather clichéd bully-with-a-heart. These three girls were poorly developed and rather unbelievable. Ollie’s aunt (and her illness) seem to have been included only as an inciting plot-device…which isn’t great as it is a cheap way to try to make your readers feel sorry or sympathise with Ollie (he didn’t need this extra dose of sad).
✗ Ollie’s parents are so unimportant and ‘unwritten’ as to be closer to two nebulous entities than to two human individuals. In her first appearance Ollie’s mother tells him that they will be moving to a new state and he can’t complain because she has a lot on her plate. Which…yeah. After that she has a few lines about ‘energy’ and such. Ollie’s father makes his first appearance around the 40% mark and tells him off because he is stressed. After that I’m not sure he does or says anything of notice. They were like the adults in Tom and Jerry..cut off from Ollie’s story, barely in the picture.
✗ Ollie’s ‘old’ friends disappear after one video call…clearly they had a very meaningful relationship with Ollie.
✗ Will’s two ‘dude friends’ were as poorly developed as the rest…
✗ That ending was way too cheesy (even by rom-com standards).

Teens who haven’t read a lot of YA might find more enjoyable than I did…but readers who aren’t keen on plots that rehash tired elements from high-school dramas might be better off skipping this one.