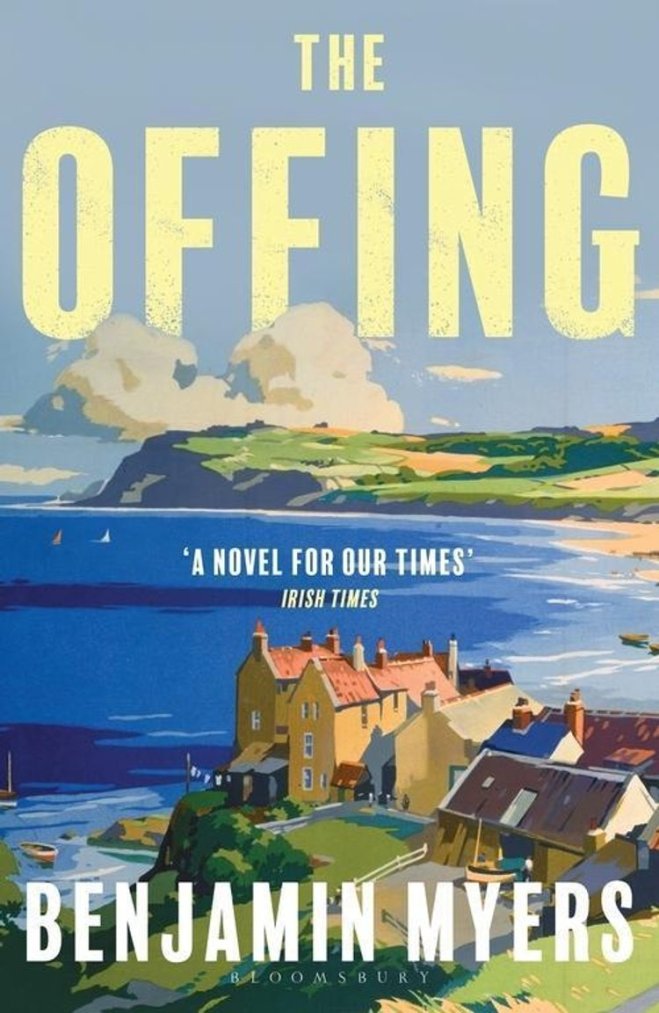 “That distant stretch of sea where sky and water merge. It’s called the offing.”

Written in a verdant prose Benjamin Myers’ novel is an ode to nature. The Offing is narrated by the son of a miner from Durham, Robert Appleyard, who, in his old age, finds himself looking back to the summer which shaped the rest of his life. In the aftermath of the Second World War a sixteen year old Robert is restless for change.
Afflicted by a restless desire to lose himself and both to leave behind the constraints of his normal life and to postpone his future as a miner, Robert takes up and travels across the northern countryside.

“I was sixteen and free, and hungry. Hungry for food, as we all were – the shortage continued for many years – yet my appetite was for more than the merely edible.”

Nature, with its flora and fauna, provides Robert with a respite from his impoverished reality. The landscapes around him fills him with a renewed sense of hope. As he observes the trees and flowers around him, and glimpses the wildlife roaming free, his mind drifts away from his worries and from the repercussions of war.

“To those blessed with the gift of living, it seemed as if the present moment was a precious empty vessel waiting to be filled with experience.”

One day he comes across an old lady named Dulcie whose direct no-nonsense manner is almost alien to him. Yet, it is by spending time in her company, doing the odd repair job for her, that Robert experiences a life very different to his old one.
Dulcie is quick to voice her distaste for nationalism and for idealising one’s country. Until this encounter Robert’s fairly ingenuous view of the world resulted in him having rather dichotomous view of war. Dulcie however, in her refreshingly brazen manner, makes him challenge his own binary thinking. She also introduces him to authors and poets whose stories and verses further inspire a young Robert.
During their meals Dulcie almost retrains Robert’s relationship to food. Growing up with food shortages Robert had never developed an appetite. Yet, with Dulcie he discovers that food can be sublime. From the inviting smells and appearances of a dish to its delicious taste.
In the course of this pivotal summer Robert’s mind and body develop. Dulcie encourages him not to limit himself, not to view his future as preordained.
As time passes we also see the way in which Robert’s presence alleviates Dulcie’s loneliness. It is because of Robert that Dulcie decides to revisit of her own past, and so she shares the most wonderful and heartbreaking moments of her life with him.

Benjamin Myers’ novel is a richly rendered coming of age. Without limiting his language he evokes this fraught period of time in a vibrant manner. Much of the narrative revolves around the narrator’s relationship to his environment. Myers’ writing style emphasises Robert’s senses and makes for a vivid reading experience.
There is also a timelessness to Robert and Dulcie’s discussions. I was completely mesmerised by Dulcie’s story and admired the frank way in which she would speak about her society. War, freedom, nature, creativity, love, language. These are some of the things which occupy the minds and conversations of Robert and Dulcie.

A relevant and nostalgic tale of an unlikely friendship and of the different ways one can connect to another person as well as to nature. Robert’s reminiscences of his youth and the past present us with seemingly quiet moments that are as moving as they are beautiful.
Brimming with luscious descriptions and a poetic language Myers’ The Offing is a spellbinding and thoughtful novel, one that will definitely appeal to nature lovers.