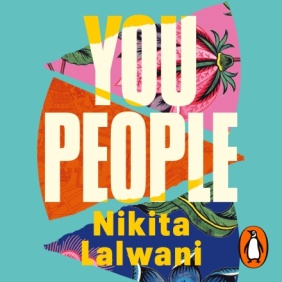 “People can see you, but they don’t want to see who you are.”

Given Britain’s political climate (in other words: the madness of Brexit) Nikita Lalwani’s You People is a poignant and incredibly relevant novel. Set in London, Lalwani’s story takes place in 2003 (get ready for some nokia-related nostalgia) and focuses on Nia and Shan, respectively a waitress and a cook, both of whom work at Pizzeria Vesuvio.

Although her father is Bengali nineteen-year old Nia ‘passes’ for white and is often mistaken for Italian. Having been raised by her Welsh mother Nia has never been in contact with her father or his culture. After years of putting up with her mother’s spiralling mental health and alcoholism Nia is eager to leave her hometown. University however doesn’t go as planned and she flees to London.
With a few white lies on her part Nia is hired by Tuli the owner of Pizzeria Vesuvio and soon she is enthralled by him. Yet Tuli—a Tamil who grew up in Singapore—with his philanthropist ways seems too good to be true. How can he afford to help so many other people? Why do people go to him?

“He is a walking set of choices and consequences: love thy neighbour, the greater good, take your pick. This image of him—of them—filters and echoes through her memory, there are a thousand iterations or more. She can never be certain of its imprint or impact. She tells herself the story as it unfolds from this moment. She does it to understand him, and so to believe in his cure.”

Having left his wife and son behind, Shan, a Tamil from Sri Lanka, is wrecked by guilt. His passage to Europe doesn’t go as planned and he falls more and more into debt. While at first, out of naïveté or perhaps desperation, he believes that he can at a later date be joined by his wife and son, once in London, he realises that the agents who organised his ‘trip’ are little more than conmen. London too isn’t the city he’d envisioned and he finds it hard to make enough money to survive each week, let alone pay his debts or the passage of his loved ones. It is Tuli, his new boss, who comes to his aid.

“They all know, everyone knows, that he did it partly for them, partly for himself, there is no way to disentangle the motivation and purify it.”

Unlike Tuli’s other employers Nia has never been subjected to xenophobia or racism. While her life has been less than ideal—punctuated by poverty, emotional neglect and abuse—she has a simplistic view of immigrants and her government, and it in her time at the Pizzeria Vesuvio Tuli challenges her idealistic notions. Nia is shocked to learn of what Shan was subjected to in Sri Lanka and that for him to be an ‘illegal’ immigrant is better than the alternative, which may be death, torture, or imprisonment.

Yet, in spite of their different backgrounds and circumstances, both Nia and Shan are wracked by guilt. They both left someone behind in order to survive and as the novel progresses their two narratives become entwined with each other.

What stands out in Lalwani’s novel is the ambience and imagery that are the backdrop to Nia, Shan, and Tuli’s lives. Through the scenes that take place at the Pizzeria and the ones that take place on London’s busy roads, Lalwani’s creates a portrait of community life. Her ear for accents and mannerism brings to life many different people and their cultures.
Through a few description Lalwani emphasises the characters’ environments. Occasionally she does so by focusing on a small detail, or by presenting the setting of a scene in an almost cinematic way.

“The glass was spotting with rain again and there was something sublime in how the red and yellow lights outside were permeating each individual bubble of water with colour.”

The unease that pervades Nia and Shan’s narratives builds up in a quiet crescendo. Although ‘not much’ seems to go on, both the characters and the readers are aware of the dangerous and vulnerable position Shan is as he spends most of his waking time unsure whether his loved ones are alive and in fear of being deported.
You People is not an easy read. The violence against and dehumanisation of ‘illegal’ immigrants is horrifying. They do not have the freedom that most people—me included—take for granted. To even speak of or refer to people as ‘illegal’ seems wrong. Yet, sadly that is how they are seen by the government. There is one particularly harrowing scene in which the immigration enforcement turns up and what follows will haunt both the readers and the other characters. The ‘not knowing’ what is going to happen to them is terrifying. That a person can be simply taken away like this is horrifying.

“They have come from the government, the logo is all over them, they think they are invincible, that is how these people see themselves. Someone has told them that they are the good guys, like those superhero films, where the audience is instructed to cheer for each every violence act committed in the name of freedom.”

Both narratives are told from a third point of view but while Nia’s sections are in the past tense, Shan’s are in the present tense. This switch between tenses suited the characters and their storylines. Nia herself says that she is always looking back, whereas Shan is stuck in a fraught present, not knowing his fate or the one of his loved ones.

“Already she was looking back at life and saying to herself, I was young then, as thought that idea of youth was over.”

Rather than using ‘Nia’ or ‘Shan’ the narratives often address them as ‘she’ and ‘he’. This might annoy some readers, and it does take some using to, but once you’ve leaned into the flow of Lalwani’s prose you might appreciate the ambivalent mood that this technique creates.

“There had always been this relationship with fiction, she imagined it could offer her blueprints for living, loving, dying—that it could save her, let her know how things should be.”

I loved the scenes which depicted interactions between the Vesuvio staff. Although Shan is far too preoccupied by his life to socialise with the other Tamil cooks, he finds himself bonding with Ava, who is a waitress at the Pizzeria. Nia, who is seen as a white British girl, feels somewhat left out by her colleagues. It is Tuli who quickly becomes the central figure of her ‘new’ life and seems to take an interest in her.
The character dynamics were as nuanced as the characters themselves. Although the cast of characters is fairly small, and the story is mostly focused on Tuli, Shan (his wife and son) and Nia (her mother and sister), however short their appearances may be Lalwani’s characters struck me as incredibly realistic.
It was interesting to see Tuli from different perspectives. His characters always retains a sense of mystery, and for most of the narrative readers are never sure of who he truly is.

Nia and Shan’s stories are steeped in loneliness. As they try to reconcile themselves with their past decisions and their new circumstances their worldview is irrevocably altered. While this novel certainly doesn’t provide easy solutions or happy endings, what it does offer us and its characters is hope.

Occasionally there were the odd descriptions which were a bit too purple for my taste ( “her whole physicality is streaked with the force of these tight lines of feminine power” / “that solid, satisfying element which ran down her spine like the hard chocolate centre of a Feast ice-cream bar”).
For the most part however I appreciated the aesthetics created by Lalwani’s idiosyncratic way of presenting a scene or articulating a phrase.

You People is a deeply melancholic and heart-rendering novel one that I would describe as being the book equivalent of an independent film. Lalwani’s quiet yet atmospheric style and her character-driven and introspective story won’t appeal to everyone…but I do hope that her novel will strike a chord with those readers who are looking for a poignant and necessary story.