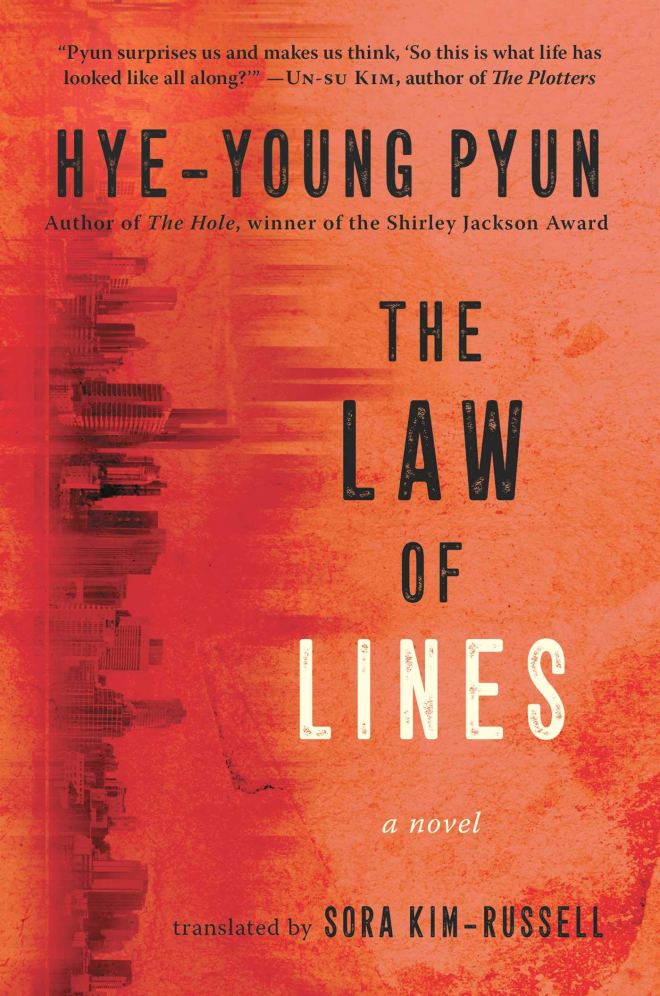 The Law of Lines by Hye-Young Pyun — book review 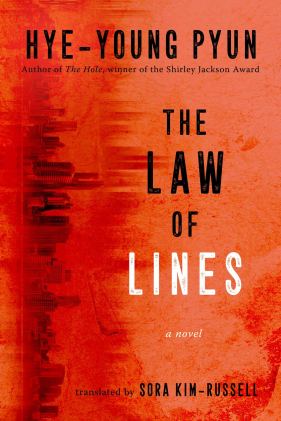 “The future was a dark corridor. And though she would grope her way through it, the door at the end would be locked tight.”

After reading that Hye-Young Pyun’s novel The Hole won the ‘Shirley Jackson Award’, I was intrigued to read her work. Thanks to NetGalley I was able to read The Law of Lines in exchange for a review.

Within its first few chapters The Law of Lines introduces us to two seemingly unconnected young women: there is Se-oh, a recluse whose indebted father attempts to take his own life by burning their house down, and Ki-jeong, an unenthusiastic teacher who receives a call informing her of the death of her younger half-sister. Confronted with such personal and sudden losses both women find their lives spiralling out of control.

“Those sounds and sentences were lost to her now. His unconditional love, his wordless yet tender gaze, his steely look of fatherly responsibility. All gone. They were each different, but to her they were all synonyms for a father.”

Se-oh begin to understand the depths of her father’s desperation and holds the debt collector who hounded him responsible. Seeking retribution Se-oh begins to stalk the collector and entertains increasingly violent fantasies. However her past, the reason why she became a recluse, catches up to her and Se-oh has to confront whether she herself is accountable for her father’s death.

“The whole time she had stayed locked up at home, she had imagined the outside world as a place that could swallow her whole at any moment. But in truth, it was a place that paid her no attention at all.”

Ki-jeong has led a rather restrained existence, ensuring that she always abided the rules of her society. Ki-jeong is aware of her faults. For example, she knows that she isn’t a very inspired or driven teacher. However, when one of her most privileged pupils plays a cruel trick on her and threatens both her career and her reputation, as well as calling into question her moral integrity, Ki-jeong looses control.
Reeling from their losses, both of these women feel let down by their country’s system of justice. Amidst a backdrop of violent and vengeful thoughts Se-oh and Ki-jeong embark on separate investigations, trying to uncover the causes that led to death of their relatives and it is by assigning blame to others they relieve their own guilt.

“Ki-jeong knew that, of all laws, this—the way one thing leads invariably to the next—was the only of life’s laws that she could not find fault with.”

The beginning of Pyun’s novel is incredibly absorbing. She immediately establishes an atmosphere of uneasiness and of moral degradation: the world she depicts is populated by spiteful, malevolent, or apathetic individuals. Those in authoritative positions abuse their powers. Greed, corruption, and cowardice seem to drive the majority of these characters. It is her characters’ malice perhaps that Pyun turns to the most. Malice seems to creep its way into her character’s thoughts, blurring the lines between right and wrong, good and evil.

“She’d felt the unfamiliar thrill that comes only when you amplify your malice.”

Se-oh and Ki-jeong narratives interrogate the difference between victim and perpetrator. Is entertaining a violent fantasy really better than actual violence? Does vengeance condone one’s wrongdoings? Pyun traces the source and effects that malice and violence have on her characters’ minds.

“When does evil intent become evil itself? Is it evil simply to imagine and harbor an idea? Does it begin when a thought is put into action? And if that action fails, then did evil never exist to begin with?”

Throughout the story an air of squalor lingers over most scenes. These unpleasant characters have filthy habits (such as spitting) and grimy morals. Debt collectors torment those who are indebted, waging psychological wars against them. Young individuals are trapped into pyramid schemes and find themselves into nightmarish scenarios (a bit a la Sorry to Bother You).
Pyun emphasises humanity’s darkness by focusing on the seedy behaviour, physical appearances, or living conditions of her characters. She is almost unrelenting in the way in which she delves into the notion of evil.

“There’d been good, and there’d been bad. That was all. At the time, she’d thought that all of it was bad. Because happiness had flitted on by while bad things had a way of lingering.”

More than once I was reminded of Park Chan-wook’s The Vengeance Trilogy. Pyun’s novel is a bleak one. Yet, as gripping as the first half of The Law of Lines was, in the latter half the story looses its momentum. Ki-jeong sort of disappears and there we get a lengthy account of what drove Se-oh into hiding. When these characters paths finally cross, I found their interaction to be somewhat underwhelming. The ending too seemed rather ill-defined.
All in all, I am unsure whether I would recommend this book to other readers. There are some wickedly clever moments, plenty of interesting observations on Korean society as well as some fascinating discussions about justice. Once the storyline lost its initial edge however I didn’t care much for what I was reading. Perhaps certain things were lost in translation but I do think that the story could have been more complete.