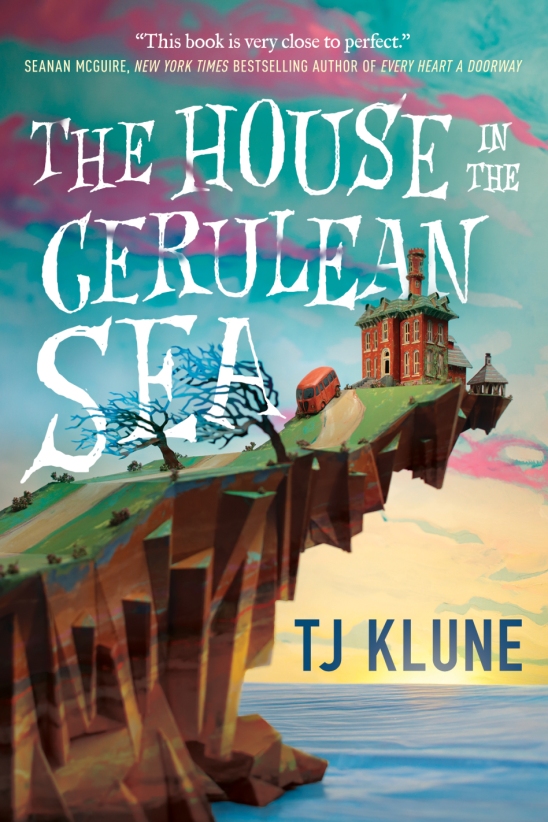 “He was here to observe and nothing more. He couldn’t influence the orphanage. It wouldn’t be proper. The RULES AND REGULATIONS were specific about such matters.”

The House in the Cerulean Sea tells an equal parts heartwarming and silly tale. The world in this novel is fairly reminiscent of our own one however its pages are full of magical people and creatures. The government closely monitors those who are deemed not human and they are raised in government sanctioned orphanages.
As a case worker at the Department in Charge Of Magical Youth (often abbreviated to DICOMY) Linus Baker, a solitary forty year old, oversees and inspects these orphanages. His job consists in ensuring the children’s wellbeing and that the people who are running these orphanages are following DICOMY guidelines. Linus himself abides by DICOMY’s strict rules and regulations.
His routine is brusquely interrupted when he is summoned by DICOMY’s Extremely Upper Management, only to be unexpectedly tasked with an unusual and highly sensitive assignment: he has to leave the city and travel to Marsyas Island Orphanage. The orphanage is run by the rather mysterious and eccentric Arthur Parnassus. It is up to Linus to determine whether the six children who reside there (a female gnome, a sprite, a wyvern, an unidentifiable green blob, a were-Pomeranian, and the Antichrist) should be taken away from the Island.
As the story progresses Linus begins to question DICOMY and its methods. Once he is able to move past what his case files tell him about these children, he begins to see them in their own right.

In the novel magical powers/appearances is a metaphor for being different. They are isolated from ‘ordinary’ humans, raised in controlled environments, treated with mistrust and or outright hatred. Linus finds himself challenging his own assumptions and preconceptions about these children.
Ultimately this is a story about the family that you choose: Linus himself has always felt like he doesn’t quite belong. On the Island, alongside the children and Arthur, he starts to feel more at ease with who he is as well as the type of person he wants to be.
The novel is filled with quirky humour and charming dialogues. There were quite a few elements that struck me as being a bit too silly for my taste, so that occasionally the story verged on being ridiculous (such as all of those ‘Oh My’ that Linus utters) but for the most part I liked this novel, it even made me smile here and there.