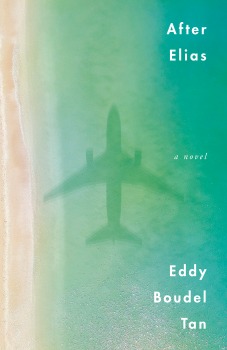 From its heartbreaking first pages, to its lump-in-your-throat epilogue, After Elias is an emotionally charged novel.

“People can bring you pain, but nothing will hurt more than the pain you inflict on yourself.”

Grief, guilt, regret, and fear dominate Tan’s narrative. Coen Caraway and Elias Santos are meant to have a fairy-tale wedding and live happily ever after. One week before their big day, the airplane piloted by Elias crashes into the Arctic Ocean, leaving Coen, who had just arrived on the idyllic Mexican island that was meant to host their wedding, bereft.
When the authorities begin speculating whether the crash wasn’t accidental, Elias becomes a prime suspect. His cryptic final words, “Pronto dios” (“soon god”) disconcert an already grieving Coen.
While his family and friends plead for him to return home, to Vancouver, Coen refuses. His stay on the island however does not keep his doubts at bay. In spite of his insisting that “he is fine”, Coen finds himself spiralling. In the passing days he tries to make sense of this unimaginable tragedy and of his own relationship with Elias.
As the narrative moves from past to present, readers begin to gain a picture of both Coen and Elias.

“Life is nothing more than an elaborate house. It starts out small, a simple shelter. Then we build upon it, room by room, believing in the necessity of every expansion, every renovation. By the time we realize it is no longer a shelter but a tomb, it’s too late.”

Coen’s grief, confusion, and uncertainties feel strikingly authentic.Tan allows his readers to witness and understand the depth and magnitude of Coen’s discordant feelings. Coen’s thoughts, emotions, and impressions are articulated in a subtle yet lyrical language.
I was often surprised, and spellbound, by Tan’s arresting imagery.

“The only sounds in the room are my pounding heart and fitful breathing. I am Lazarus returning from the land of the dead, a corpse trapped by life.”

Tan renders Coen’s pain with exceptional compassion, without sensationalising Coen’s—and other characters’—grief and desperation. What particularly struck me was how ‘real’ Coen felt. His fears and anxieties are depicted with incredible authenticity. The way he simultaneously wants and doesn’t want to confront the darkest aspects of his relationship with Elias, his dormant yet inherent conviction that he will never be happy, his inability to express how he feels…everything about him felt real.
Other characters, such as his two best friends, Vivi and Decker, his brother, Clark, the hotel’s bartender, Gabriel, are just as believable. Decker in particular has a complex relationship with Coen, one that will undoubtedly make some readers tear up (I certainly did). These characters are flawed yet capable of change. While readers may not come to know them as well as they do Coen, they will get an impression of what kind of person they are (or want to be).

Although Tan doesn’t provide lots of descriptions when it comes to the appearance of his characters or the island itself, his narrative is remarkably atmospheric. Tan’s discerning prose relays the mood or quality of a certain conversation or moment.
The distinctive and deceptively dream-like setting of the island, as well as Coen’s own dreams, reminded me of certain novels by Ann Patchett, in particular State of Wonder and The Magician’s Assistant. The way in which Tan approaches painful themes bear resemblance to Benjamin Alire Sáenz’s own approach in his more adult novels, such Last Night I Sang to the Monster and In Perfect Light.

Through his prose, which is in turns lucid and opaque, Tan showcases his capacity for empathy and compassion. He offers insights into grief, loneliness, abuse, mental illness, and trauma.
After Elias is an artful and heart-wrenching novel. Although it doesn’t make for ‘easy’ reading material, its cathartic narrative and underlying message of hope are guaranteed to leave a lasting impression.

PS: I’m so grateful to NetGalley for having accepted my request to read After Elias. I’m not sure I would have ever read this novel if I hadn’t spotted on NetGalley’s ‘recently added’ page.