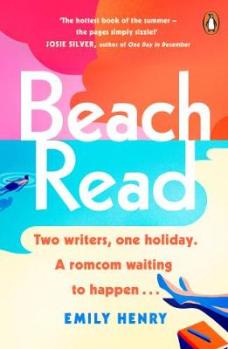 Romance enthusiasts will undoubtedly enjoy Emily Henry’s Beach Read.
Personally, while I do enjoy romance books, I usually prefer them to be less cheesy…and while certain scenes or lines in Beach Read did make me smile, it wasn’t quite the ‘laugh-out-loud’ read I was hoping it would be.

This is yet another novel that seems to hint at an ‘enemies-to-lovers’ romance but in actuality the two leads are never truly enemies or hostile towards each other. January, our lead and narrator, has a bit of a chip on her shoulder when it comes to Augustus. While they were in college Augustus made a comment that January interpreted as disparaging both her person and her writing. Years later the two find themselves living in the same town.
January needs a place to write her novel. Not only is she financially ‘broke’, but her boyfriend recently broke up with her. January, who is still grieving the loss of her dad, has few options lefts, so she decides to move into her father’s secret home. As she tries to make sense of the secret life her father kept, she finds it hard to envision writing a story with a ‘happy ending’.
January is quite ‘shocked’ to discover that her new neighbour is Augustus, aka Gus. She is sort of envious that his books are seen as ‘highbrow’ whereas hers are dismissed as ‘women’s fiction’. The two strike up a deal: January will write a book without her trademark ‘happy ending’ while Gus will try to write a ‘happy’ book.

While I liked the premise of this book I soon found myself rolling my eyes at its cliches: Gus has an ‘inky gaze’, a ‘crooked’ smile, he is ‘tall’ and ‘dark’. January’s backstory with her father was rather superficial: she feels betrayed, that much she states early on. Other than that I found that she would often merely rehash her story (her mother had cancer, twice, her father wasn’t the man she thought he was, their marriage was far from perfect). Her relationship with people other than Gus were very feeble: she has a best friend who lives in another city so the two of them keep in touch through texts…which were often very silly and seemed to be included only to add humour. Her mother was mentioned now and again but her personality remained undisclosed. We know she had cancer and that she doesn’t want to speak about her husband’s ‘secrets’. It would have been a lot more compelling and challenging if January had actually loved her ex-boyfriend but she admits early on that she loved the idea of them rather than him…which seemed to go against the book’s proclaimed self-awareness. Given that January writes romcoms it would have been more refreshing if we were presented with a story in which there isn’t such a thing as ‘you can only have one true love’…
Gus…he was very much the epitome of the angsty love interest. At one point he says: “I am angry and messed up, and every time I try to get closer to you, it’s like all these warning bells go off”….which yeah, who says stuff like this? And how is this romantic?
Not only does Gus have an appropriately Troubled Backstory™ but he is just sooooo angsty. Just because his eyes are ‘flashing’ or he smirks a lot doesn’t negate how annoying his ‘you can’t possibly understand me/I am a walking tragedy’ thing he has going is.
Most of his lines sounded unbelievable. At one point he tells January that she is “so fucking beautiful” and “like the sun”. Like, wtf man.

Another thing that I was hoping would receive more focus was their books. January once says that if she were to swap her ‘Janes’ for ‘Johns’, her books would no longer be labelled as ‘women’s fiction’ but as ‘fiction’…which is a statement I don’t entirely agree on. There are lots of female authors who write books with female protagonists that do not fall under the ‘women’s fiction’ category. Perhaps January should have been asking herself why certain genres are seen as inferior to others, or why the ‘chick-lit’ is seen as ‘rubbishy’ whereas the popular books by male authors (such as James Patterson) are not similarly dismissed.
There a few paragraphs of January’s own writing which were really cringe-y. I could not take her ‘serious’ story seriously, it was ridiculous. Also, why perpetuate this stereotype of the writer only being able to write about their own lives?

January is immediately attracted to Gus, so there is never a slow build up from friends to lovers. During their first few scenes together her stomach is already ‘flip flopping’.
Their make out/sex scenes were…okay I guess (?). Although I’ve read far worse there was one scenes which was just yuck-y: one moment January compares herself to a ‘toddler’ sitting on Gus’ lap, the next they are making out. Most of their flirting revolves around ‘junk food’ which yeah, I am not a huge fan of this ‘bonding over our mutual love of donuts’. It just strikes me as juvenile.

For the most part I didn’t particularly hate or love this book. I do enjoy reading ‘feel good’ books (some of my faves are by Sophie Kinsella and Mhairi McFarlane) but Beach Read didn’t really work for me. I guess I was excepting a more ‘subversive’ take on the romance genre…but here there are tropes upon tropes.

One thought on “Beach Read by Emily Henry — book review”