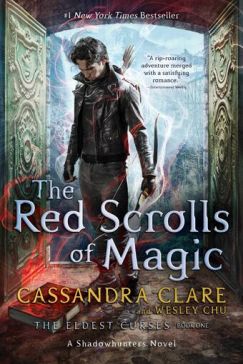 “Romance was a lot of work.”

The Red Scrolls of Magic is a fun throwback to Cassandra Clare’s TMI in which Magnus and Alec finally get the stage for themselves. After the Mortal War the couple takes a well-earned romantic getaway in Europe. Once in Paris however an ‘old friend’ of Magnus breaks some bad news to him: a demon-worshipping cult called the Crimson Hand, which Magnus himself may have founded as a ‘joke’, is killing downworlders. From then on Magnus and Alec go from France to Italy, trying to find and stop the cult and leaving mayhem in their wake. Getting to know each other isn’t easy, getting to know each other when demons are trying to kill you…well that complicates things.
There is plenty of action and wit in The Red Scrolls of Magic. Even in the most deadly of situations Magnus remains a joker. By contrast Alec finds himself mingling with Magnus’ downworlder acquaintances, most of whom are suspicion or hostile towards Shadowhunters.
This was a very entertaining read. It has plenty of amusing dialogues, it gives some insight into the early stages of Magnus and Alec’s relationship (bonus: we read of Aline and Helen’s first meeting), and it has plenty of romance.