The Trouble with Hating You by Sajni Patel — book review 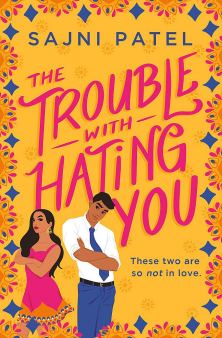 As much as I wanted to love The Trouble with Hating You, I found its storyline frustrating and I’m ready to spill some tea.
While I appreciated the way in which Sajni Patel incorporated serious issues into her narrative, I couldn’t push aside my annoyance towards her main characters. Yes, they did have chemistry and their own character arcs but I wasn’t a fan of the way in which Liya Thakkar was portrayed. She’s a self-proclaimed feminist who more than once states that she’s not a ‘damsel in distress’.
Her storyline is very much focused on why she feels ‘broken’ and on her refusal to let her ‘weaknesses’ show. Given her backstory her distrust of men is understandable. However, even if you have most of the characters describe one character as a ‘feminist’ doesn’t mean she’s automatically one. Case in point, Liya repeatedly tells men that she’s not the kind of woman they think she is (‘loose’). She stresses that she’s not a ‘whore’ or a ‘slut’, and every-time she used or alluded to these words it was clear that her stance towards ‘these’ women (those who fall under these labels) isn’t good. Way to stand up for your fellow women Liya, just worry about your own reputation and push ‘women who are like that’ under a bus.
I’m just really tired by these female leads who made into these big ‘feminist’ when in actuality they perpetuate sexist notions and actually end up being ‘saved’ by this hot man with abs. Here there is one of the most clichéd scenes ever: Liya injures her ankle and has to be carried by the male lead. Why can’t it ever be the guy who hurts himself ? Not only that but what led to Liya injury seemed to emphasise that nothing good will come by going out with men who aren’t the fabulous hero.
While Jay Shah has slept with three women with 0 angst, only horrible men are interested in Liya. Jay is the only decent guy she’s encountered. There was something vaguely moralistic about it. Liya’s more casual attitude towards sex is shown to have negative consequences.

Back to the story: after a clichéd first meeting these two are forced to spend more time together because of their work. Liya ‘dislike’ towards Jay lasted longer than it was credible. I understand that initially they didn’t get along and Liya had few reasons to like Jay. But after he ‘rescues’ her, he turns into this helpful and caring guy. Yet, even then she childishly insist that they shouldn’t even be friendly towards each other. Mmh…grow up?
Jay trauma struck me as corny. He has scars and doesn’t want to talk about his ‘dark’ past. Yet he forces Liya to open up about her traumatic experiences.
There are a few other things that kind of grinded my gears: Liya’s friends being rude to the woman who’s interested in Jay, Jay saying ‘I’m a nice guy’ more than once (yet he stubbornly pursues Liya, inserting himself into her private affairs, all the while assuming that she will reciprocate his interest) with a single- what Jay says to Liya’s father (view spoiler)[ “She alread told me she was molested, why she turned to sleeping with guys, how many she’d been with” (hide spoiler)]….which 1) that was private you asshole, 2) he makes Liya sound like Georges Simenon (who claimed to have slept with 10,000 women).
I hated the judgemental way in which Liya’s completely normal lifestyle is portrayed as (and I don’t mean that because within her community she’s labelled as ‘bad’ but because the way the story unfolds suggests that her ‘carefree’ attitude towards sex lands her in trouble or with troubled men). By the end it seemed that the only reason why Liya no longer feels ‘broken’ is because of Jay.
Overall, I probably wouldn’t recommend this. The more I think about this book, the more I dislike it. If anything I found it incredibly hypocritical. Here we have a narrative intent on making Liya into this cool and independent ‘feminist’ when she herself is incredibly judgemental about other women, views all men as ‘bad’, but then needs to be saved by Jay after her ‘liberal’ attitudes land her in danger.