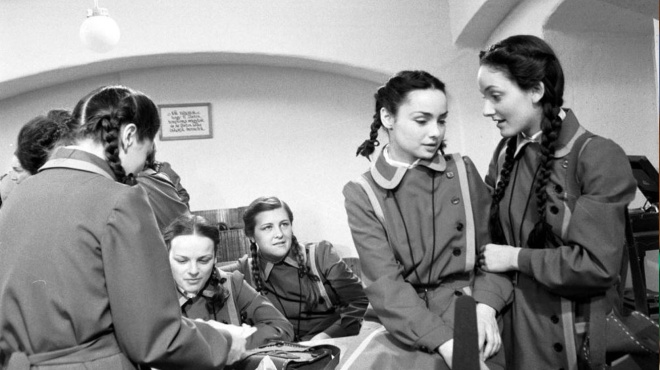 “In later years, whenever she dreamed of the fortress and the city the wind would always be present, moving restlessly among human figures obscurely glimpsed in the haze.”

Abigail follows fourteen-year-old Gina Vitay’s time as a Matula student in the months leading to the German occupation of Hungary. First published fifty years ago, its English translation has only just come out (Len Rix’s translation does not disappoint). Last year I read, and was perturbed by, Magda Szabó’s The Door. While I was enthralled by Szabó’s prose, I was ultimately left feeling rather mystified by the whole ordeal. Abigail, on the other hand, is deceptively simple in that it may at first strike readers as a conventional coming-of-age. Szabó however permeates this tale of youthful innocence and friendships with an air of unease. Similarly to The Door, Abigail presents its readers with a narrative that is fraught with a quiet suspense. Our heroine is initially oblivious to the threat looming over her country and she’s far more concerned with the various dramas that make up her everyday life at her exclusive all-girls school. After she’s made privy to a secret that if known could wreak havoc, she will have to learn “dignity and self-discipline”.
Although the narrative obliquely hints at this possibility of danger and violence, an atmosphere of apprehension prevails.

“From this moment onwards, Gina, your childhood is over. You are now an adult, and you will never again live as other children do. I am going to place my life, and yours, and that of many other people, in your hands. What can you swear on that you will never betray us?”

In the autumn of 1943 (when Hungary was still a member of the Axis powers), the pampered daughter of a widowed General is abruptly sent away from her beloved home in Budapest and enrolled in a remote all-girls boarding school. Located in Árkod, Bishop Matula Academy is an exceedingly puritanical institution, a place that our heroine quite fittingly describes, more than once, as a “fortress” and a “world of black and white”. The General refuses to disclose the reason for this ‘exile’ and an uncomprehending Gina is unable to discern her father’s true motivations.

“In the past she had been able to persuade him to do almost anything; now he seemed deaf to all her pleadings. He had decided on her fate without discussing a single detail and had merely informed her what would happen.”

At Matula Gina feels constricted by the school’s “strictly regimented life, with every minute accounted for”. Worse still, after her catastrophic first day at Matula she becomes persona non grata with the rest of the fifth year. To begin with Gina views the other girls and their traditions through her ‘big-city’ lenses. She’s contemptuous of their childish games believing that her flirtations with a young lieutenant (which took place at her Auntie Mimó’s tea dances) make her far more worldly than the other girls. Being ostracised from the other girls soon takes its toll and Gina is left feeling profoundly alone and miserable. Most days, her classmates (who share her living quarters with) refuse to interact with her, and when they aren’t ignoring her they insult or bully her.
Gina is also forbidden from interacting with the outside world, and her letters and weekly phone calls to her father are monitored, and if need be censored, by members of staff (since the general should only hear “cheerful, positive things from [her]”).
Gina’s difficult beggings at Matula are alleviated by the presence of a statue known as Abigail. According to school legend, Abigail aids and protects Matula’s students. Gina’s initial skepticism dissolves when she herself receives Abigail’s protection. The mystery of Abigail’s identity underlines Gina’s story, even after Gina reconciles herself with life at Matula.

“Everything that had been boring, childish and indeed hateful the day before now seemed wonderful, reassuring and comforting.” 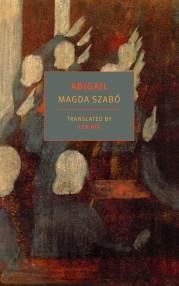 While there are moments of idyllic happiness, these are far and few between. Gina’s prickly, and impulsive, nature are rendered with great empathy. Szabó’s narrative reflects Gina’s ‘limited’ worldview. She misunderstands and misinterprets the adults around her, in particular the dynamics between two of her teachers and Sister Susanna, the fifth year’s prefect. Gina, like most of the other girls, views her class tutor Kalmár as a contemporary “St. George, a knight in shining armor”. Her feelings towards her Latin teacher, Kőnig are far from amicable. She mistakes his kindness and compassion for cowardice and stupidity (another reviewer quite aptly compared him to Dostoevsky’s Prince Myshkin).

“Once again she had the feeling of being caught up in a play, a play in which she had a totally insignificant role and whose plot was impossible to follow.”

After Gina’s adolescent worries are replaced with far greater ones (ones that serious social implications), she tries to become a responsible adult. She soon learns that even good actions can backfire. Similarly to The Door, the characters in Abigail often cause the most harm to each other when they are trying to do good.

“All my life I have been a wild thing, Gina reflected. I am impatient and impulsive, and I have never learned to love people who annoy me or try to hurt me. Now I shall try to learn these virtues, and I shall do so for the sake of my father: for him I shall seek to be gentle and patient.”

In spite of her best efforts, Gina cannot pacify herself with her school’s authorities nor does she feel less stifled by its suffocating rules. Still, readers will be able to witness Gina’s incredible, and admirable, character growth. I deeply sympathised with Gina, especially since I too found Matula to be a repressive institution, more interested in assigning blame and punishment than actually encouraging students to learn and grow from their mistakes.

“She was oppressed by a consciousness of living in a world of strangers, subject to rules that constantly disrupted the rhythm of her life, and where everything that belonged to her, everything that was part of her, seemed far away.”

In many ways Abigail has all the trappings of a coming-of-age. While Abigail’s identity is not a mystery to the reader, there are plenty of smaller mysteries peppered throughout Gina’s story. Harrowing moments are made all the more powerful by the fact that they often occur off-page. Gina’s troubled relationship with her classmates feels far from childish, and the friendships that she will later develop with some of the other girls are rendered with surprising tenderness.

“When they were at last in bed she lay there, wide awake, thinking about the strange and unexpected way important events in our lives come about—never as we imagine them beforehand, always in quite other ways, in very different circumstances and seemingly by chance”

Szabó’s sinuous and beguiling storytelling gripped me from the very first pages. Abigail provides us with an intimate glimpse into the life of a girl burdened with a dangerous secret. Szabó captures the fraught climate of a country at war.

“She tried to imagine what it would be like if every window in the country could be left open and every street flooded with light, and there was no war and none of this dying, no burdensome secrets, no danger or destruction. ”