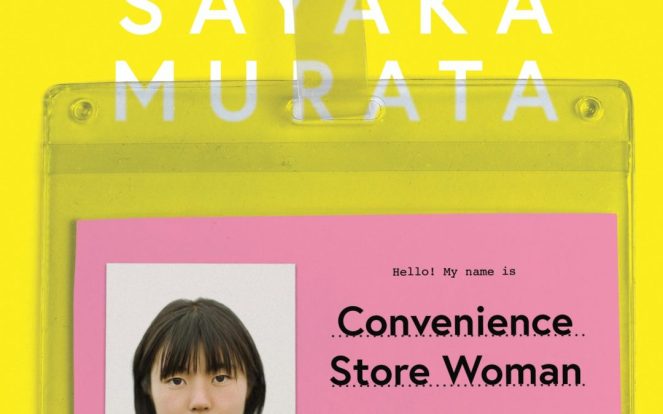 “The normal world has no room for exceptions and always quietly eliminates foreign objects. Anyone who is lacking is disposed of.”

Convenience Store Woman delights in its own absurdity. In spite of its slender size and its deceptively deadpan style, Sayaka Murata’s novel is surprisingly subversive.
Keiko Furukura’s clipped yet enthusiastic narration manages to both amuse and bewilder. In the very first pages she recounts a childhood episode in which she asks her mother whether they could grill and eat a dead bird. Yet, in spite of these macabre instances, Keiko’s narration has this effervescent energy, this ceaseless optimism, enlivens the more depressing, ambivalent, or unsettling moments.

Keiko is a thirty-six-year old who has been working part-time at the same convenience store for the past eighteen years. While her peers are married and/or have ‘proper’ careers, Keiko is quite content to remain at her convenience store. While other employees have moved on to other jobs, Keiko has no desire to change (herself and her job). She appeases her school acquaintances and colleagues by mimicking their language and behaviours, but she does so not because she actually wants to fit in or due to peer pressure but because she doesn’t want others to question her or the lifestyle she leads (for example that she has never been, nor does she wish to be, in a relationship).
We follow Keiko as she performs the ordinary tasks that make up a shift at the convenience store: welcoming customers, filling shelves, store cleanliness, serving customers at the till…while I personally hate doing these kind of things (and I work as a customer assistant) Keiko seems to genuinely like and be actually good at her job. That she is happy to be a ‘cog’ in the capitalist machine is certainly disquieting but readers will have a hard time envisioning a future in which Keiko is content not to be a convenience store worker (since being a store worker seems an integral part of her identity).

Through Keiko’s unique mind ordinary moments and conversations are tinged with surreality. Although she’s unerringly logical, a lot of her thoughts are frankly bizarre or plain outlandish. Even her most sober observations (on Japanese social and gender norms, notions of normalcy) are injected with a dose of peculiarity.
Through Keiko’s uninhibited narration, Murata emphasises the absurdities of our modern age (particularly about work culture, social conformism, the expectations society places on single women in their 30s, alienation).
Playful, funny, thought-provoking, and occasionally disturbing, Convenience Store Woman is a deeply engrossing novel and Keiko’s slightly off-kilter reality is bound to appeal to readers who enjoyed Oyinkan Braithwaite’s My Sister, the Serial Killer, Hilary Leichter’s Temporary, books by Hiromi Kawakami, or the recently released Pizza Girl by Jean Kyoung Frazier.