Set against the backdrop of the 2016 referendum (Brexit) Just Like You follows two very different individuals who happen to fall in love. Recently divorced Lucy, a forty-one year old white schoolteacher, is look 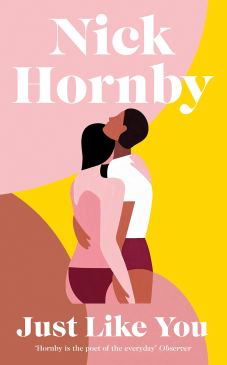 ing to date again so she hires a babysitter for her two sons. The babysitter, Joseph, happens to be a twenty-one year old black man who works part time at a the butcher counter and aspires to be a DJ. In spite of how little in common Lucy and Joseph have, the two become romantically involved. Nick Hornby tackles many different issues: politics (particularly on Brexit), class, race, interracial dating, racial profiling, divorce, drug addiction, and alcoholism.
Throughout the course of their relationship Lucy and Joseph attempt to bridge the gap between their generations and to overcome their drastically different interests and backgrounds. Their friends and relatives are not very approving of their relationship, and their age gap raises a few eyebrows.
While I did enjoy reading the early stages of Lucy and Joseph’s relationship (a lot of which occurs via texting), once they begin sort-of-dating, Hornby seems to gloss over their more positive interactions, focusing instead on scenes in which tensions arise between the two. While their seemingly silly misunderstandings were realistic, in the way they often escalated to actual arguments, they didn’t give a full-picture of their relationship. Their earlier chemistry seems to fizzle out all too quickly, so that we are left with two people who don’t really act like they really like or even love each other. Towards the end in particular I wish that Hornby had articulated Lucy and Joseph’s feelings for each other (it seemed that ‘for reasons’ they wanted to make things work).
I also wish that Joseph hadn’t been painted as being so clueless and disinterested in politics and literature. He has no real passion for music, so his dj aspirations seemed little other than a diversion.
The story too could have been more developed as it comes across as rather directionless. Lucy and Joseph have very few meaningful connections, so that many interactions—in which either of them is sick of talking to whoever they are talking to—felt repetitive. They have awkward dinners and get-togethers, they meet up with ‘friends’ they don’t particularly care for…
And while I understand that Hornby wanted to play the devil’s advocate when he introduces us to ‘likeable’ characters who turn out to be xenophobic Brexiteers…well, the wound is still fresh, and I have 0 sympathy for these characters.
While I appreciated that Hornby wanted the everyday moments that make up a relationship, I found myself wanting a bit more passion or romance between Lucy and Joseph. Most pages however seemed to focus on the more negative aspects of their relationship….and by the end I was just ready to be done with the 2016 referendum. The first time around was hard enough, do I hate myself so much that I want to experience it again? Not really.