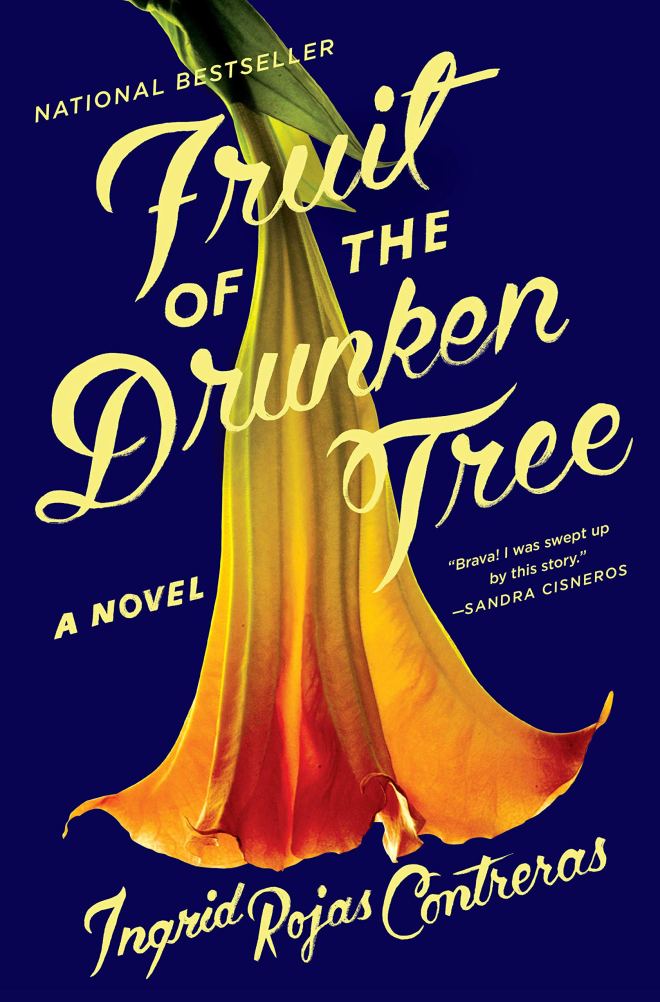 Fruit of the Drunken Tree by Ingrid Rojas Contreras

Given that this book was described as being in the vein of Isabel AllendeI, I had quite high exceptions. While I did find the opening chapter to be intriguing, to compare Fruit of the Drunken Tree to Allende or Gabriel Garcia Marquez seems both lazy (a comparison that has less to do with substantial similarities—such as style or genre—that with geographical location….I’m not sure why publishers are still comparing any new authors from Latin America to Allende or Gabriel Garcia Marquez) and inadequate. Sadly, I never warmed to Ingrid Rojas Contreras’ writing style nor her characters. While I understand that the author based the story on her personal experiences, I found her storyline to be more intent on creating emotional drama than sense. Worse still, I could not get past the novel’s subtly racist undertones

“War always seemed distant from Bogotà, like niebla descending on the hills and forests of the countryside and jungles. The way it approached us was like a fog as well, without us realizing, until it sat embroiling everything around us.”

First, I’ll start with a few positives. Ingrid Rojas Contreras renders the internecine climate of 1990s. The author details the realities of Colombia during Pablo Escobar’s reign of terror by conveying the day-to-day dread, fear, and violence that prevailed in this period. I appreciated the factual aspects of this novel, such as when Contreras’ recount Escobar’s latest actions by having characters listen to the radio or watch tv. The atmosphere of political uncertainty has a visible influence on the characters—regardless of their age/class. I liked reading about the games Chula and her older sister played (the bond between Chula and Cassandra was the most believable relationship in the whole novel).

Now, for the not so positives. The writing was weighed down by laboured similes (in which red fishes are “gelatinous mice” and headlights seem “traced out of nothingness by the invisible hand of God”). Ineffectual descriptions added little to the narrative, seeming more confusing that evocative (a particularly bad one is: “They looked different, but I couldn’t put my finger on what it was. Other than to say they were thinner, and they no longer looked like children. It reminded me of how Petrona didn’t look her age, but older. Like they were scratched behind their faces.”). Chula and Petrona’s had a too similar way of narrating things, which cast a doubt on their supposed differences in age/class.
Chula’s perspective is incredibly one-dimensional. Chula is looking back to this period of her life. She’s now older and in America. Yet, ‘present’ Chula offers no special insights into what happened in Bogotà. She more or less sticks to the perspective she had of things as a child. She doesn’t understand and is mystified by what’s going on around her. There is 0 foreshadowing, which again felt like a missed opportunity. It would have added much needed suspense and provided a break from child-Chula’s limited pov. I wasn’t expecting a Kazuo Ishiguro level of conversation between past and present but Chula’s perpetual incomprehension grated on me. And Contreras could have done something more similar to what Wayétu Moore does in her memoir (the first section she recounts the Liberian Civil War as she experienced it—that is as a child—while the following ones focus on her as an adult looking back on those same events).
Perpetua’s chapters were brief and intentionally vague. Her feelings towards Gorrión and her employers are never clearly depicted. A lot of what she does or say seemed out of the blue, and ultimately made her into an unconvincingly inconsistent character. Her story also seems to carry a moralistic tone that I didn’t particularly care for (her mother warned her not to frequent that “bestia, animal, atrevido, desgraciado” who is “black like dirt”).
The mothers in this novel are portrayed like the classic ‘hysterical’ mothers, prone to screaming outbursts and fits of violence. 90% of the time Chula’s mother is portrayed as being horrible, irrational, and/or insensitive. Then she has these very out-of-character in which she seems to have had a completely switch of personality. While I know from personal experience that there are parents who can be very erratic (the joys of bipolarity) Chula’s mother was often presented as being some sort of wicked witch (the whole thing with the drunken tree). Her instability existed only to make readers pity Chula (who otherwise would have been too ‘privileged’).
Now….Gorrión. He is the only explicitly black character and he’s a monster with no redeeming qualities. Every scene he’s in is made to feel the reader uneasy. His eyes ‘bore’ into this and that, he uses his body to intimidate women and children, he’s an abusive rapist with no scrupulous. He’s just bad, through and through. Often, he’s described as the ‘black guy’ or the young man with ‘afroed hair’. Other are suspicious of his blackness, and the narrative seems to agree with their racial judgment. He’s the true ‘villain’ of the novel while Escobar remains a background figure. Gorrión doesn’t have a real personality as he only seems to have morally reprehensible character traits. The way the author describes his eyes and nose also worked to give this impression of Gorrión being less-than-human. Which…how about not (before I’m accused of being overly sensitive, there are at least three other reviews on GR who—regardless of whether they ultimately liked or disliked this novel—criticised the author’s portrayal of Gorrión.
The novel’s examination of class divide seemed simplistic and relied on tired stereotypes.
The drawn-out plot is slowed down by the author’s repetitive language. Some of the characters seem to change in the last few chapters, but this change seemed more for effect than anything else.

Overall, I did not like this novel. It was quite moralistic (especially towards Perpetua’s sex life) and the ‘friendship’ between Chula and Perpetua was poorly developed. The author seemed only to have scratched the surface of the reason why Chula was so obsessed with Perpetua. The characters—in particular the adults and Perpetua—acted incongruently throughout the novel, often only to add unneeded drama or angst.
I doubt I will ever feel inclined to read more by this author.