Having only read Carmen Maria Machado’s memoir, I wasn’t sure what to except from The Low, Low Woods. The summary promised a creepy tale: we have the classic small town setting (here called Shudder-to-Think), strange creatures (deer-women, skinless men), and an old mystery.
The first issue begins with our two protagonists, El and Octavia, waking up in a movie theatre and not being able to recall the previous hours. Something happened, they know as much, but finding out the truth behind their missing memories might stir up some trouble.
While I appreciated the story’s atmosphere, I didn’t find it very unsettling. We have random monsters that seem to appear only because ‘reasons’. Our two main characters weren’t very interesting or likeable. One of them is secretly dating a popular girl, and that storyline felt very unexplored.
There were many events that had unconvincing explanations. The author seemed intent on making the story as mysterious as possible by leaving loose strands. Each issues ends in a cliffhanger that is often not directly resolved at the beginning of the following issue. And then we have the 5th issue which is basically info-dumping. There was no suspense. The two girls discover the truth behind the town’s past in a very anticlimactic way. The ‘feminist’ angle was…meh? The story doesn’t have anything interesting or insightful to say about men who abuse or control women.
The art I quite liked. I saw other reviewers criticising it for being ‘scratchy’ but I personally thought that it fitted with the story’s aesthetics. Plus, there were some very stunning pages: 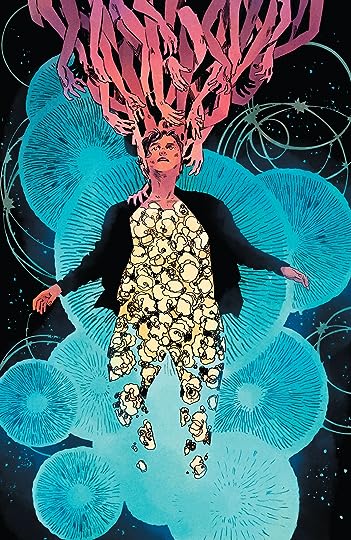 While I didn’t particularly like this graphic novel’s writing (we had clichéd quasi-wisdoms such as: “Sometimes, you have to listen to someone else’s story”), its characterization nor its storyline, the art was pretty good and both main characters were queer…so I guess you win some you loose some.

MY RATING: 2 ½ out of 5 stars
Read more reviews on my blog / / / View all my reviews on Goodreads