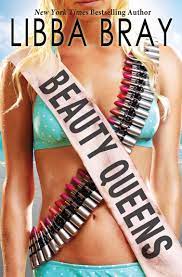 This novel proved to be the perfect ‘escape’ read. While I may not have been enamoured by every single book I’ve read by Libba Bray (the finales to her series left me a wee bit unsatisfied) I do consider her to be an amazing writer and a favourite of mine. Usually, however, her books are in the realms of the ‘historical’, so I wasn’t sure what to except from Beauty Queens, I just knew that after watching a certain series I fancied a Lord of the Flies kind of tale (with a female ensemble). And wow…Bray sure delivered. Beauty Queens was everything I didn’t know I wanted. This is the kind of satirical teen comedy that will definitely appeal to fans of classics such as Heathers, But I’m a Cheerleader, and Mean Girls. The story, writing, and characters are all over the top in the best possible of ways. This is the funniest book I’ve read in 2020.

Beauty Queens begins with ‘the Corporation’ addressing us readers, “This story is brought to you by The Corporation: Because Your Life Can Always Be Better™. We at The Corporation would like you to enjoy this story, but please be vigilant while reading”. We are also told to keep vigilant as the story we are about to read may have some ‘subversive’ content. Throughout the novel there are footnotes by ‘the Corporation’, sometimes advertising ridiculous products and sometimes professing distaste or disapproval over a certain scene.
The novel mainly follows nine beauty queens contestants who after surviving a plane crash that killed the majority of the other contestants (one for each state) find themselves on a seemingly deserted island. Rather than focusing on two or three contestants, Bray gives each of these nine beauty queens a backstory (I think only three contestants do not receive this treatment). We start with Adina, Miss New Hampshire, an aspiring journalist who joined the contest only to expose how misogynistic it is. At first Adina is snarky and not a great team player. Although she calls herself a feminist she has very ‘fixed’ notion of feminism, and her relationship with the other contestants will slowly challenge her previous views (on the contest itself, on liking thinks deemed ‘girly’,etc.). She immediately takes against Taylor, Miss Texas, the ‘leader’ of the surviving beauty queens. Taylor insists that they should keep practicing their routines for the contest as she believes that help is on the way. Taylor is badass, and I definitely enjoyed her character arc (which definitely took her down an unexpected path). We then have many other entertaining and compelling beauty queens: Mary Lou, who becomes fast friends with Adina in spite of their seemingly opposing views when it comes to sex; Nicole, the only black contestant, who wants to be a doctor but has been time and again been pressured into contests by her mother; participating as the only black contestant faces racism from the contest itself and the her peers; Shanti, an Indian American girl from California, who initially sees Nicole as ‘competition’ but as time goes by finds that she is only who understands how challenging it can be to navigate predominately white spaces; Petra, a level-headed girl who faces a different kind of prejudice; Jennifer, a queer girl who loves comics and has often been deemed a ‘troubled kid’; Sosie, who is deaf and always feels that she has to be happy in order to make others feel more ‘comfortable’; and, last but not least, Tiara, who at first seems like a comedic character, the ditzy or dumb blonde, but who soon proves that she is a very empathetic girl.
The girls don’t always get on with one another. In spite of their different backgrounds, interests, and temperaments, they have all been made to feel inadequate or ‘too much’.
As if surviving a deserted island wasn’t difficult enough a certain corporation is running some secret operation not far from the girls’ camp. Throw in some pirates/reality show contestants and there you have it.
Bray satirises everything under the sun: reality shows, beauty contests, pop culture, beauty products, corporations. While some of her story’s elements may be a bit ‘problematic’ in 2020, her satire never came across as mean spirited. In the end this is a story about acceptance and female solidarity. Bray shows all the ways in which society pressures and controls teenage girls, allowing for diverse perspectives and voices. Most of all, this novel is hilarious. Bray handles her over the top storyline and characters perfectly.
What more can I say (or write)? I loved it. This is the kind of uplifting read I would happily re-read.