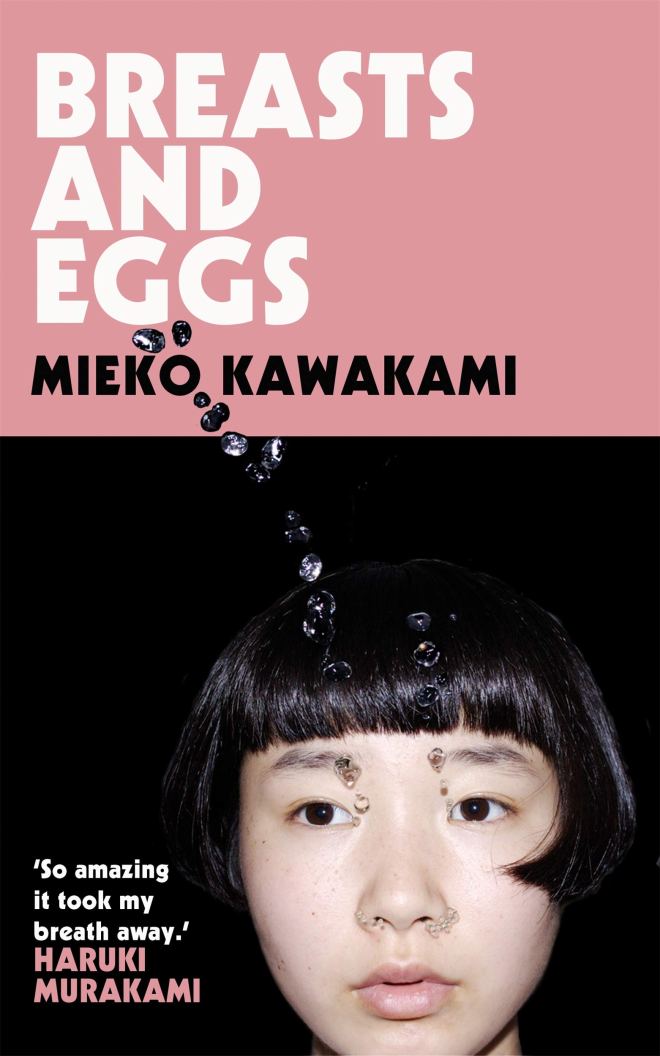 Breasts and Eggs by Mieko Kawakami

disclaimer: this is less a review that a cathartic rant. If you want to read this book I recommend you check out other reviews instead.

Breasts and Eggs was an exceedingly frustrating and overlong novel. My interest in this novel was piqued by its title and the buzz around it. While the first three or four chapters were relatively entertaining, I soon became wary of its critique of gender. If you find it fulfilling to write poems about your menstrual blood maybe you will appreciate Kawakami’s brand of feminism.
The first half of Breasts and Eggs is concerned with ‘breasts’. The novel is narrated by Natsuko, a woman in her thirties who lives in Tokyo and who aspires to be a writer. In this first section of the novel Natsuko’s 1st person narration is interrupted now and again by her niece’s diary entries. Midoriko is twelve (possibly thirteen? who knows) and she is feeling very angsty about puberty. She has stopped talking to her mother Makiko, Natsuko’s sister, who works as a hostess and is determined to get breast enhancement surgery. Midoriko and Makiko visit Natsuko in Tokyo, and they spend a few days together.
Around the 40% mark the story jumps in time. Natsuko, now in her late thirties, is a respectable author who is considering artificial insemination in order to have a child. Midoriko and Makiko have short cameos towards the end of the novel but for the most part this section of the novel focuses on Natsuko wanting to have a child, interacting with colleagues and friends, attending events (related to her work and or to parenting/artificial insemination).
I do not have many positives things to say (or write) about this book. What I did appreciate was the novel’s sense of place. It was especially interesting to read about the differences between Osaka and Tokyo (the dialect etc.). There was also an a scene that was pure absurd humour (when Natsuko meets that sperm donor).
I kept reading hoping that the story (if we can call it such) wouldn’t unfold the way it did…but I was sadly proven right. Here is a list of things that I did not like about Breasts and Eggs:

1) Sort of feminist…?
Maybe if your name happens to be J. K. Rowling you will find Kawakami’s feminist vision to be to your liking. I really thought that the title was challenging the idea that women are ‘breast and eggs’. But…it doesn’t. The first section makes it seem as if Natsuko, who makes it clear she does not like sex, does not want a partner or a child. Good for her, right? No. Of course not. When the biological clock strikes Natsuko decides that she wants a child because ‘reasons’ (she keeps insisting that she wants a child so she can ‘meet’ them…wtf?). While there are many single-mothers in this book, who are shown to do their best for their child, women over the age of 30 who do not have children are either A) miserable or B) traumatised. Type A chose her career over marriage and children, now she’s lonely and sad. When Natsuko tells her that she is planning to have a child A is bitter because she feels ‘betrayed’. Type B is the classic type who was sexually abused and believes that “life is pain” (that is an actual quote) and that being born is traumatic, and that the world is hell, and that you should not bring more children into it. To say that I am tired of these kinds of caricatures would be an understatement. The story implies that if you are a woman and you choose not to have children you will be lonely (as if not having children means that you cannot have friends or you can only be friends with people who are childless) and pathetic or traumatised.
I really thought that the story would eventually introduce us to a woman who is happy and does not have children but nay.
Midoriko’s diary entries were so ridiculous. She goes on about periods and vaginas…was this necessary? Her entries were far from revelatory, unless you happen to be someone who knows nothing about those things. And, can I say, it really annoyed me by the way the narrative would go on and on about menstruations. Not all women have them. Due to an ED I had a few period-free years. Did that make me less of a woman? By the way the author seems to elevate menstruations and I did not care for it.
Midoriko’s diary was banal, it seemed a clumsy attempt to convey the hormonal mind of a soon to be teenage girl…in the second half of the novel Midoriko is no longer the focus of the story (thank God) but Natsuko informs of the following: “Midoriko was cute, but she didn’t care much for makeup or fashion. She was not your average girl, as if that wasn’t clear enough from her strong personality.” Pfft. In other words, Midoriko is Not Like Other Girls.™
Now onto more dodgy things…There is a scene in which our MC misgenders someone. And you might argue that my feathers were ruffled because I do not understand that not all cultures are as woke as Britain or the US…but hey, I actually come from a not very LGBTQ+ friendly country so I could have looked past this scene…but one thing is using the wrong pronouns, one thing is having your protagonist be fascinated with the genitals of the person she misgenders (“I tried seeing what the tomboy had between her legs”). Was this whole scene necessary? No. And the whole policing bathrooms just stinks of J. K. Rowling.
The story is also very on the nose when it comes to the imbalance between wife and husband. An unhappy friend of Natsuko describes being a wife as “Free labor with a pussy.” Such feminism!

2) The story = Fake deep navel-gazing
Every person Natsuko encounters tells her their life story or philosophy. Apparently this is because Natsuko worked in a bar and people just naturally confide in her. Okay, whatever, I’ll believe that. But, the things the people speak to her about are so…unbelievable? They will say fake deep shit and then the narrative will go along with it? Rather than pointing out how trite they are being. A lot of the characters will say things along the lines of ‘What is the point in life? / What does it mean to be alive? / Is love a human construct?’. Painful stuff I tell you. I rolled my eyes one too many times.
Natsuko’s inner monologue was mostly navel-gazing. Yet, her thoughts are presented in a way that suggests they ought to be taken seriously (“ Life is hard, no matter the circumstances.” Geez. Wow. Such insight into human existence. So deep. Much wow). Her observations about marriage and parenting are also puddle-deep: “Think of all the husbands and wives trying to have kids, and all the couples having sex who could wind up having a baby. Could all of them look each other in the eye and say they really, truly knew each other?” Can anyone claim they know anyone? Mind-blowing. When Natsuko is thinking of the reason why she wants to have a child she thinks the following: “What did it even mean to “meet” someone? I”. Uuuuugh.

4) The body is abject
We get it the human body sucks (“My complexion was horrendous, and my face was lifeless. I reminded myself of pickled eggplant. Not the skin, but the greenish flesh inside”) and ugly (I swear the book was obsessed with uberly skinny women: “Her legs stuck out from her coat like poles,” / “her collarbones were so pronounced you could’ve hooked your finger on them.”). Being alive is painful, occupying a body is painful, yadda yadda yadda. Existence is agony.
It seems that the author had to make a point of reminding us of every aspect of the human body and bodily fluids (we are told about Natsuko’s yeballs, lungs, throat, spit, bile, oily skin, and pee)…and I just did not care for any of it.

5) What was the point?
Really, what was the point? The book equates women to breast and eggs. The feminism in this novel is dusty, the story drags, the characters are caricatures, our main character is a self-pitying wishy-washy forgettable narrator…the half-hearted examination of parenthood/motherhood hardly makes up for the rest.