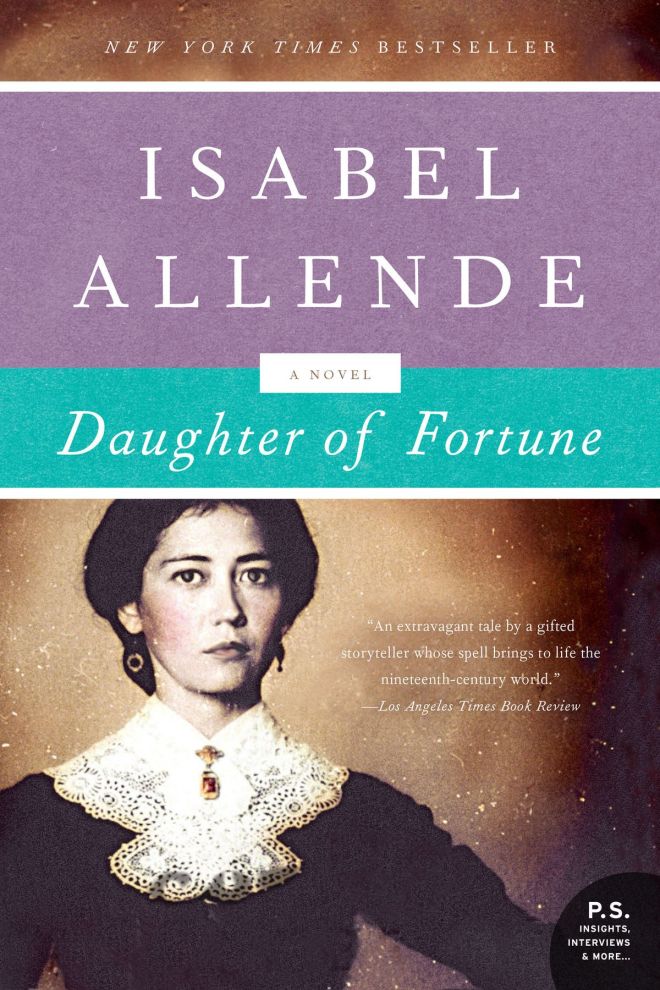 Daughter of Fortune by Isabel Allende

For a work that was first published in 1998 Daughter of Fortune strikes me as something more suited to the 1970s. Don’t get me wrong, I love Isabel Allende’s work and she is one of my favourite authors, however, at the risk of coming across as an oversensitive zillennial, her mystification of China struck me as rather old-fashioned. The way Allende portrays other cultures and groups relies on clichés. Yes, some of these characters were, for the most part, ‘harmless’ stereotypes, but nonetheless, they did induce an eye-roll or two on my part (for instance, every indigenous woman from Chile is cuvacious and passionate).

As with many other novels by Allende Daughter of Fortune is very heavy on the telling. There are very few, if any, dialogues, which did occasionally distance me from the events Allende narrated. Still, her storytelling, for the most part, kept me engaged in the characters and their stories.
The novel begins in Chile during the 1840s. Eliza Sommers, a Chilean girl and the novel’s central character, is adopted by Rose Sommers, an unmarried Briton. Rose lives with her strict older brother and tries to raise Eliza as a ‘proper’ Victorian lady. Eliza, however, goes on to fall head-over-heels in love with a Chilean man of ‘dubious’ character. When her beloved is struck by gold fever and leaves for California, a bereft Eliza will risk her own life to be reunited with him.
The story definitely takes its time, and, the first few chapters are less focused on Eliza than a tertiary character, a certain Jacob Todd who travels to Chile after making a bet. He falls for Rose but she clearly does return his affection. We also read about his friends, Feliciano Rodriguez de Santa Cruz and his wife, whose role in the novel feels rather superfluous. During Part I we also learn more about Rose and her brothers and of Eliza’s childhood with them.
The remainder of the novel details Eliza’s epic journey to find the man she loves. During this time Eliza becomes acquainted with Tao Chi’en, a shanghaied physician who for a time worked as a cook on a ship captained by Rose’s other brother, John. Across two lengthy chapters, Allende recounts Tao’s life, from his early days to his marriage and, after his wife’s death, of his eventual disillusionment. Once in California Eliza and Tao grow closer and it is their bond that truly makes this novel. Allende, quite clearly, shows that Eliza’s feelings towards her paramour lead her to idealize this poco di buono man. Yet, her devotion towards him is such that she is willing to spend years of her life in search of him, passing as a young man in order to travel with more freedom.
The novel is certainly full of drama and Allende frequently falls prey to sappy platitudes (about love, destiny, desire, womanhood).
But whereas I could easily overlook Allende’s tendency towards the melodramatic, I had a harder time looking past her clichéd portrayal of China, its culture, and people. When the narrative is relating Tao’s youth, Allende, quite out of the blue, feels the obligation of using a metaphor involving rice (when describing a Chinese mother’s grief: “the little girl’s accident was like the grain of rice that makes the bowl overflow.”). Tao, who is in his thirties, is described looking as sometimes looking like a teenager, and, “ancient as a turtle”, so that “it was easy then to believe that he had lived many centuries”. Whyyyyyy do we have to compare the one Chinese character to a turtle?! And of course, because he is an East Asian man he has to have “delicate ” hands.
Allende includes many other stereotypes about China, and I just have very little patience for this sort of stuff. It didn’t help that Allende includes a plethora of clichés (such as prostitutes with hearts of gold, or Eliza ‘rescuing’ a Native American boy….come on Allende!).
Yes, there were many beautiful descriptions and Allende clearly researched this period of history but I had a hard time getting to like or care for her characters (who are racist, sexist, homophobic, xenophobic, judgemental, anti-abortion). While it made sense, given that the story takes place during the 1840s, it made it difficult for me to actually relate or sympathize with the characters. Eliza was beautiful (in an unconventional way, of course), kind, and clever. The classic heroine. Her love for this guy was definitely of the insta-love variety, and while the narrative does point this out, I struggled to understand what possessed her to follow this guy whose blandness is such that I cannot recollect his name.
I was pleasantly surprised by the fact that the development between Tao and Eliza, and it was refreshing to see a Chinese man be not only one of the main characters but the heroine’s love interest. I wish the novel had focused exclusively on them, with less of the ‘will they won’t they’ subplot.
Overall, the novel is kind of cheesy and rather dated. Still, fans of Allende who are less ‘sensitive’ than I am will probably enjoy this a lot more than I did.