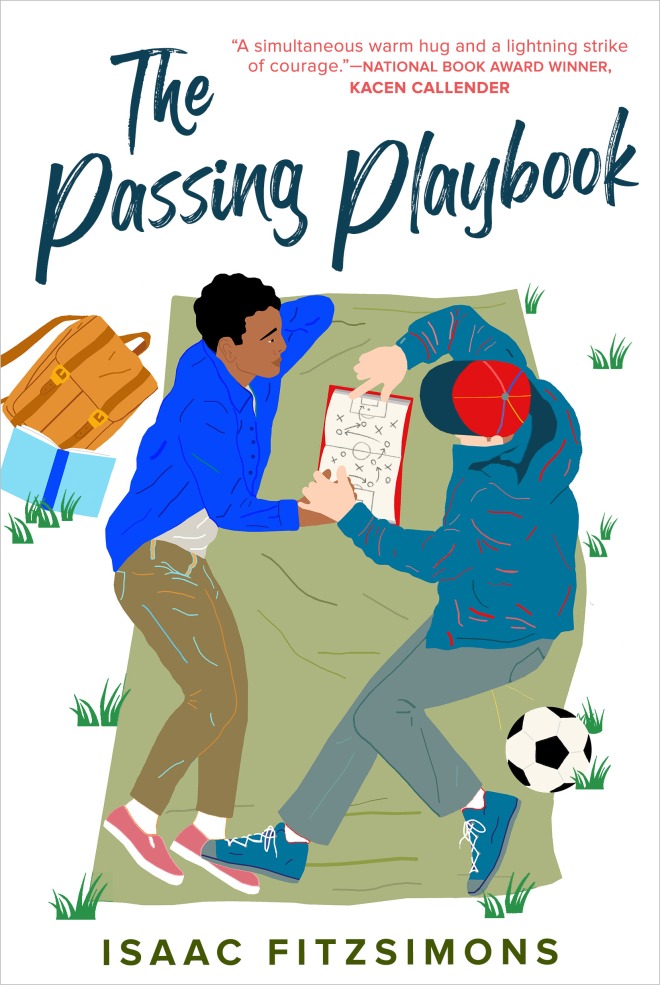 The Passing Playbook by Isaac Fitzsimons

“He wasn’t sure if parents had limits to their love, but he was worried that one day something would push them too far and he’d find out.”

After a horrible experience at his old high school Spencer Harris is ready to turn a new leaf. He’s Black, fifteen, a bit of a nerd, and good at soccer. His new private school offers him the chance to start over, and, despite his initial desire to ‘lay low’, he finds himself joying the school’s soccer team. No one at Oakley knows he’s trans, and while Spencer is not ashamed of who he is, he doesn’t want to re-experience the bullying and harassment he was subjected to at his old school.
While Spencer becomes friends with the other boys on the team, his budding crush on a fellow team member and the fact that he joined the team after his parents explicitly forbid him to…well, these make his life a bit more complicated.
Things take a downward turn when Spencer is benched due to a discriminatory law.

Isaac Fitzsimons’ prose is the classic YA coming-of-age kind of fare, simple and readable, only occasionally coming across as a wee bit green (some lines of dialogue here and there, maybe a phrase or two: “They lost the game that day, but Spencer gained a lesson he’d never forget”). I appreciated how inclusive this book was. In addition to Spencer being trans, we have queer, gay, autistic, and non-binary characters.
Spencer comes across as a realistic teenager, sometimes prone to angsting over this or that, being a bit self-involved, or giving his parents a hard time,. We can also see how hard it is for him, how anxious he is about people accepting him for who he is. He was a really sweet kid and I really admired that he speaks up about the gender-neutral bathrooms and for being so supportive towards his younger brother.
I also liked how uplifting the story was. It made me smile more than once and I am so happy that Fitzsimons didn’t let his story follow the path of many other lgbtq+ YA book (usually a character is outed) and that he actually made his mc’s parents into more than one-dimensional characters. The authors keeps a good balance between Spencer’s character arc and the romance subplot.

This was a really wholesome book. We have a cute romance, as well as good family and friendship dynamics, and the author includes realistic and current issues in his storyline. There may be the odd cheesy moment but I could have not cared less (if I wanted 100% realistic stories I would not be reading anything ever).
This is clearly a novel with a big heart. The author treats his characters and their struggles with empathy and understanding. If you are a fan of Kacen Callender or Julian Winters you should definitely consider giving The Passing Playbook a chance.