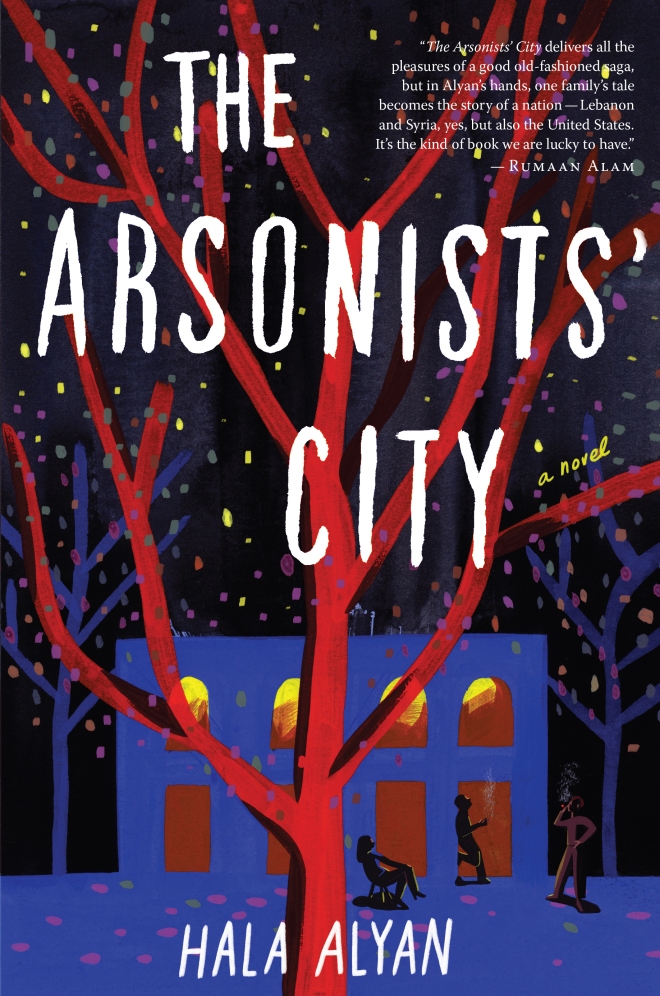 The Arsonists’ City by Hala Alyan

Moving through space (America, Lebanon, Syria) and time (from the 1960s to 2019) The Arsonists’ City tells a sprawling yet engrossing tale about the Nasr, a Syrian-Lebanese-American family. Written with the same subtlety and beauty as her debut novel, The Arsonists’ City presents readers with a cast of fully-fleshed out characters, however flawed or frustrating they may be, a rich exploration of the Nasrs’ personal and cultural identities, and a glimpse into Lebanon and Syria’s complex pasts and presents.
The prologue opens up with the death of a young man. The narrative then introduces us to the Nasrs’ ‘children’. There is Ava, the eldest, the only one in the family who is not driven by ambition or particularly cares to be in the spotlight. Although she’s quite content with her job as a microbiology teacher, her marriage is undergoing a rough patch. her relationship with Nate, her husband, is undergoing a rough patch. We then have Mimi, their mother’s golden boy, whose musical career never truly kicked off. As Mimi’s bandmates get younger and younger, and his peers are getting married and having children, he feels stuck. Naj, the youngest and the only one who lives outside America, is part of a successful musical duo. In Beirut, she feels free to do as she wishes. Her family don’t know she’s gay and Naj isn’t keen on abandoning her party lifestyle.
Over the years the siblings have drifted away from each other. Seemingly out of the blue their father, Iris, a heart surgeon, decides to sell his family home in Beirut. After this sudden decision, the Nasr are reunited in Beirut. Close proximity reignites deep-rooted jealousies and brings to the light old family secrets and betrayals. Their feelings towards each other, and themselves, are complicated, messy. They bicker a lot, snitch on each other (often to their mother), and, in general, don’t have the easiest time together. However, as Alyan so brilliantly demonstrates, family bonds, however thorny or challenging, can be a true source of happiness or comfort.

Their reunion in Beirut happens quite later on in the narrative. Before that, we delve into Ava, Mimi, and Naj’s everyday realities. From their romantic relationships to their sex lives and careers. Alyan also provides us with glimpses into the lives of the people around them—their partners, colleagues, friends, bandmates—so that we end up with a rich cast of characters.
Each of the children reacts differently to their father’s decision. Ava and Mimi are initially unwilling to go to Beirut but are ultimately worn down by their mother’s unrelenting recriminations. Naj isn’t particularly happy at the news either as she feels quite possessive of her life in Beirut.
The narrative then transports us to Damascus, in the 1960s. Their mother, Mazna, falls in love with the theatre and begins to dream about a future as a renowned actor. The Lebanese Civil War is the background to Mazna’s chapters which heavily focus on her acting experiences. She befriends Idris, aka her future husband, who is Syrian and his close friend Zakaria, who is Palestinian and lives in a refugee camp.
The remainder of the novel moves between the present, with the family reunited in Beirut, and the past, where we read of Mazna and Idris’ early days of marriage and of their eventual migration to California.

Most of the characters make bad choices, they hurt the ones they love, they are unsatisfied by the direction their lives are taking (both Mazna and Mimi’s careers never truly resemble what they’d envisioned), and they either cheat or are cheated on. I appreciated how each character has to deal with failure or heartbreak, either as a direct consequence of their actions or due to circumstances out of their control. I also liked how realistic the children’s relationship with one another was. Alyan gives her characters both individual and shared history, which makes them feel all the more authentic. Alyan also brings her settings to life, for better or worse.
What felt a tad unnecessary was the extensive forays into Mazna’s past. She wasn’t a particularly likeable or sympathetic character (my favourite was probably Harper, Mimi’s Texan girlfriend). For their flaws, I found myself much more interested in the lives of her children.
The story at times felt a tad too melodramatic, especially in regards to certain ‘revelations and all that cheating. I swear the Nasrs’ are a family of cheaters. It got kind of repetitive (wow, quelle surprise, someone is cheating/being cheated on, yet again). There was an odd line sexualising a child which felt a bit…yuckish? And one that gave me incest-y vibes, which was also pretty unecessary.
Despite all that, I remained enthralled by Alyan’s storytelling and piercing observations. Her dialogues ring true to life and the character dynamics are very compelling.
With the tone of Elif Shafak The Saint of Incipient Insanities and the scope of Roopa Farooki’s The Good Children, The Arsonists’ City offers its readers a captivating and intricate family saga populated by nuanced characters and deeply rooted in Lebanon and Syria’s histories and cultures. In spite of its length (the audiobook is over 19 hours) The Arsonists’ City proved to be a gripping read one that I might even re-read.