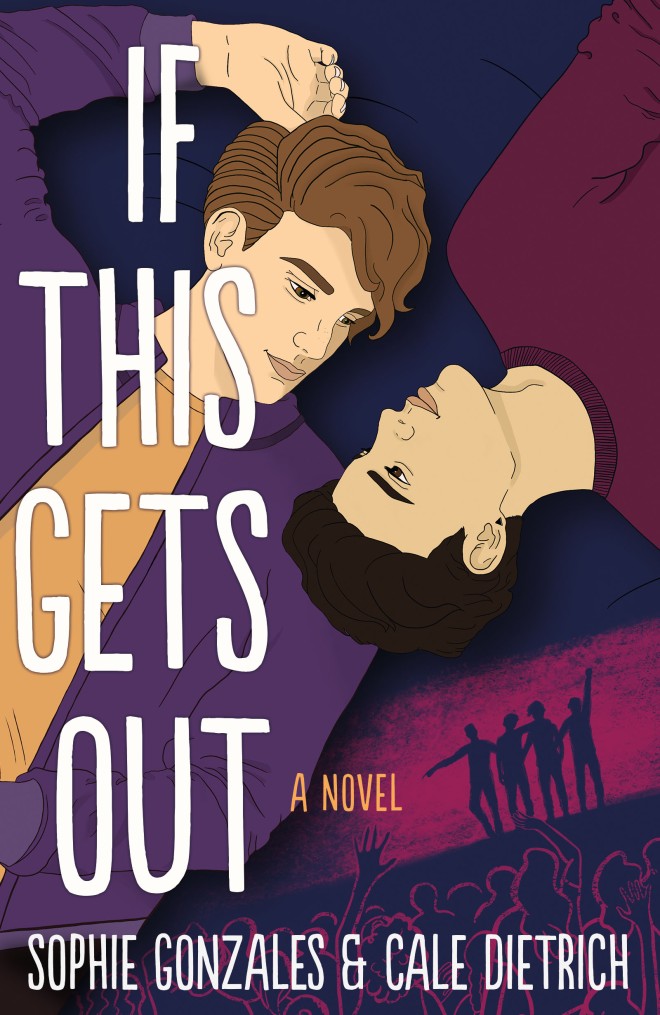 If This Gets Out by Sophie Gonzales & Cale Dietrich

“It’s been so hard for me to believe that being adored doesn’t mean I’m one mistake away from being despised.”

If you are looking for an escapist read, look on further. If This Gets Out is a cute and ultimately uplifting YA romance. It does have the sort of tropes and scenarios that you would get from fanfic but I happened to be in the mood for something cheesy and fun.
I have never been a fan of boybands nor am I into ‘shipping’ real-life people so I read If This Gets Out on its own merit (ie without drawing comparison to that boyband). Our dual narrators, Ruben Montez and Zach Knight, are members of a famous American boyband, Saturday. While Ruben, Zach, Angel, and Jon all love being in a band together and enjoy the perks that come with their job, they have little freedom (creative or otherwise). Their management has forced them into adopting a certain personality (for example Angel and Jon’s ‘personas’ are shaped by racial stereotypes) and the boys are beginning to resent this. Ruben is gay and is tired of being forced to keep his sexuality a secret. Zach is not too happy with his lyrics always being turned down for not being ‘pop’ enough. Angel, who is very energetic and loud, turns do drugs and partying. Jon, who happens to be the son of their manager, is clearly not comfortable with being the band’s ‘sex’ symbol.
On a tour to Britain and Europe, things get worse. Their management controls their every move and the boys feel increasingly under pressure. They aren’t allowed to do any of the touristy things and their management are constantly monitoring them (often criticising them). Ruben and Zach become particularly close during this time and their feelings are definitely less than platonic. Zach, however, is unsure of his sexuality or what he wants and briefly, things between them don’t go too well. Thankfully the story doesn’t dwell on their disagreement for too long and the two get together. But as you might guess their management isn’t too keen on their romance (given that their audience consists mostly of young girls they have to remain ‘available’).

The story is certainly entertaining. While most of the adult characters are rather one-dimensional I did like the dynamics within the band. Some of the disagreements between Ruben and Zach did not make much sense (especially towards the end, it seemed like the plotline needed an argument so an argument happened). The narrative mostly focuses on showing how controlling, manipulative, and downright shitty the adults around the boys are (Ruben’s mother being the worst of the lot, even if she was not entirely convincing) and the downsides of fame (creepy/stalkery fans etc.). The story is clearly about the freedom to be yourself and being allowed to figure yourself out without others pressuring you into being someone you are not. I appreciated these messages and I did find the novel to be engaging. The writing was decent, but I did find myself preferring Ruben’s chapters. At times Ruben and Zach seemed a bit undefined but I didn’t really go into this expecting nuanced character studies. If you are looking for an easy read (kind of silly, lil bit angsty) that manages to lightly touch upon some important issues, If This Gets Out may be the right read for you.