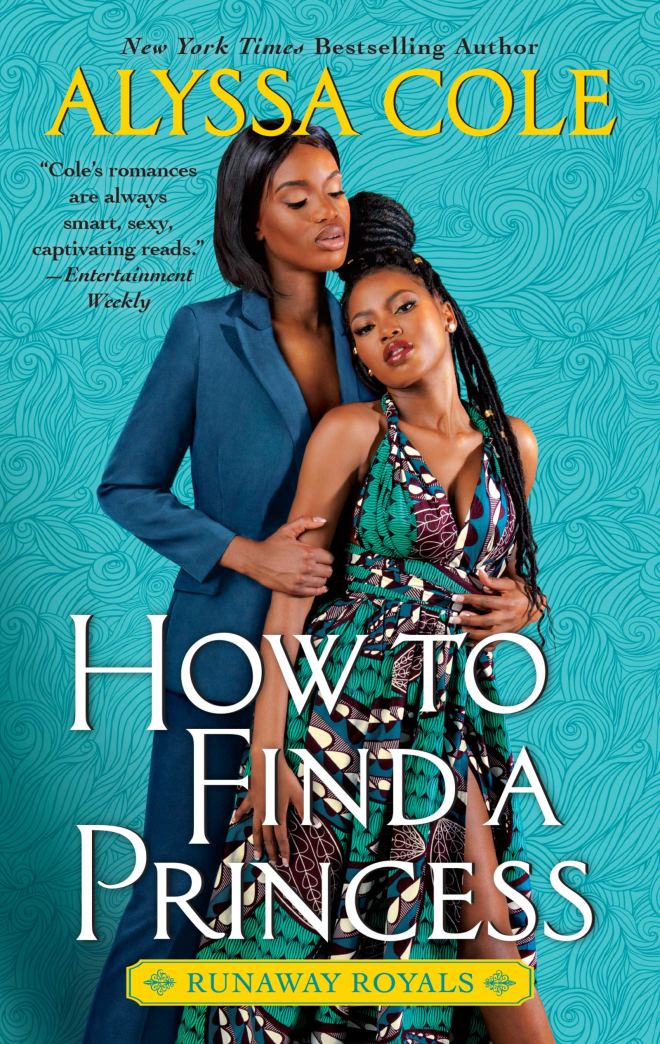 How to Find a Princess by Alyssa Cole

“A princess and her lady knight—the kind of fairy tale she’d always wanted, if she had to be a princess.”

Perhaps I hyped myself so much so that disappointment was inevitable. How to Find a Princess was one of my most anticipated 2021 releases and I can’t say that I loved it. It had its entertaining moments and some funny lines but the pacing was all over the place. Also, tone-wise this felt less like an Anastasia retelling and more like something in the realm of a Netflix princess movie. I guess it makes for a decent escapist read.

After being let go from her job working at a store and being dumped by her girlfriend Makeda Hicks feels that she needs to change her attitude. The people around her either exploit her kindness or feel suffocated by it so she decides that she will start standing up for herself more. When an investigator from the World Federation of Monarchies shows up at her grandmother’s hotel Makeda is for one in her life quite vocal about not wanting to do what other people tell her to do. This investigator, Beznaria Chetchevaliere, is convinced that Makeda is her country’s missing heir and despite Makeda’s protestations, she is determined to follow the job through as to do so would reinstate her family’s honour (her grandmother was accused of betraying their now long lost Queen). The narrative doesn’t really provide much background for these characters other than vague impressions of their lives so far. They both seem to have no friends nor do we really delve into their relationship with their family members. Makeda’s strained relationship with her mother felt very surface level and seemed to exist only to complicate Makeda feelings towards the whole royal thing (her mother was obsessed with the possibility of Makeda being a princess and pretty much ridiculed in front of her own school turning Makeda into a pariah). Understandably Makeda isn’t keen to go to Ibarania.
The first 30% of the narrative feels very rushed and the chemistry between Beznaria and Makeda came across as somewhat rushed. The two bicker for a good 80% of the novel and I would be lying if I said that it didn’t get repetitive (because it sure did). Much of the humor stems from the cultural difference between Beznaria and Makeda and sometimes it felt rather forced. Beznaria is neurodivergent and this is sometimes used as a source of humor as she is often portrayed as taking things literally or is shown to be unaware of many social norms. 30% in, their relationship and the plot hit a plateau. The two make their way to Ibarania on a ship posing as a married couple because of reasons where they spend most of their days bickering. It is only around the 70% mark that their relationship moves on from this childish stalemate. But, to be perfectly honest, I didn’t feel the chemistry between them. Beznaria lies so much (lying by omission is still lying) and never properly apologises for the way she basically manipulates/bullies Makeda into going along.
We also never learn much about Ibarania other than it being a (fictional) island in the Mediterranean. A very small section of the novel actually takes place there and we don’t really glimpse its customs/traditions/peoples/landscapes. Also, while we know this place is missing an heir the narrative doesn’t really provide much information in regards to why they did not look for them before.

I loved how casual the queer rep was and there was the odd moment that made me smile or that I found cute. Overall however the world, characters, and story within this novel felt very undefined. There were too few secondary characters and the ones that were mentioned now and again (on the ship for example) blurred together. Bez and Makeda as leads were a bit confined in their roles (Bez being this offbeat investigator and Makeda a nice girl who doesn’t want to be a princess). The whole ‘watering can’ metaphor to describe Makeda’s feelings was kind of forced and lasted way longer than it should have.
The narrative plays around with popular fanfic tropes (fake dating, only one bed) and it doesn’t take itself too seriously. If you are in the mood for an easy sapphic read, this may very well hit the spot. I for one hoped would have preferred for Bez and Makeda not to spend most of the novel pretending they are not into each other.