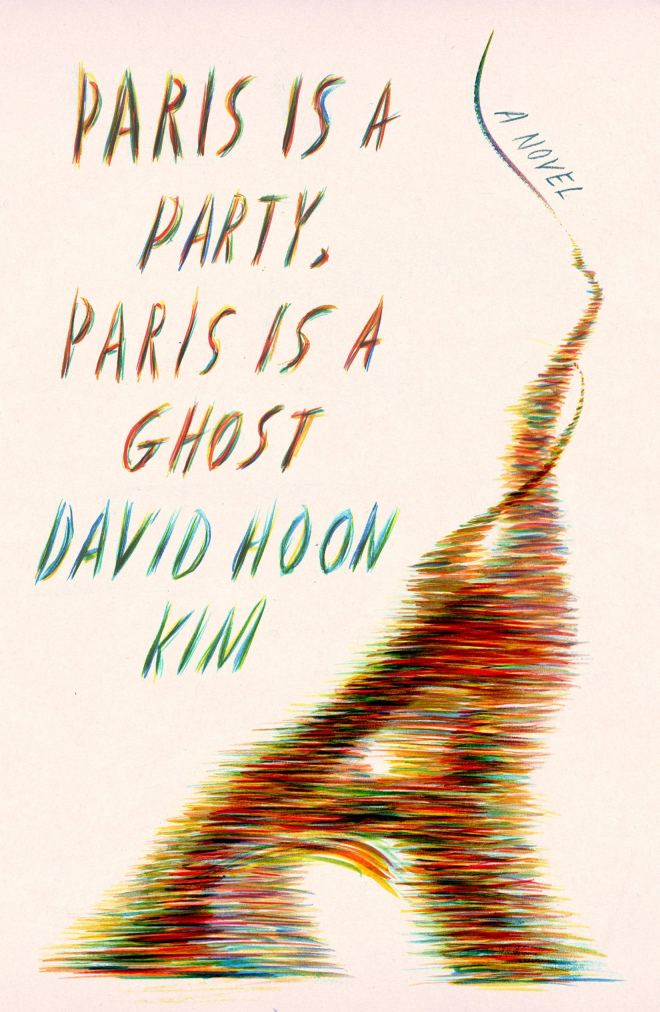 Paris Is a Party, Paris Is a Ghost by David Hoon Kim

While I can recognise that Paris Is a Party, Paris Is a Ghost is far from a terrible novel, I don’t have a lot of positive things to say about it. Personally, I don’t think the world needed yet another novel about a modern-day (wannabe) flâneur (who happens to be, you guessed it, an intellectual cis straight man whose personality is akin to a slice of soggy toast) having a metaphysical existential crisis in Paris (where of course he falls for an elusive woman).

This is the kind of novel that cares little about the plot or characters. Instead, the narrative seems very much intent on being incohesive, presenting us with scenes and or reflections that blur the line between reality and dreams. While I usually quite like novels that manage to create and sustain a surrealist mood, here, from the very get-go, I found the narrative, its structure in particular, to be little other than artificial.
This novel seems to be desperately striving for this peculiar absurdist tone but, in the case of this reader at least, it just fell flat. Sacrificing style over substance also results in a cast of barely sketched out characters, figments really, that do not manage to hold one’s attention. The weakest aspect of the novel lies in Henrik, our main narrator and major character. His voice was très insipid, to the point that I would often have to make an effort to follow his train of thoughts. His seemingly interminable inner monologues were dull indeed. He often recounts the exchanges that he has with others so that I felt all the more distanced from the story’s events. The guy also behaved in a rather inconsistent way so that I sometimes had the impression that the story was being told by numerous narrators, instead of the one guy.

In the first section, we learn a little about Henrik, a Japanese adoptee to Danish parents. He’s completing some sort of thesis or dissertation on Samuel Beckett while living in Paris. He speaks three languages, Danish, English, and French and is an aspiring translator who wants to do English/French translations (not an easy endeavour given that neither language is technically his ‘mother tongue’, which is danish). He’s dating Fumiko, a Japanese woman who for reasons unknown to him (let alone us) has locked herself in her dorm room. We never meet Fumiko, as after days of confinement she commits suicide.
We then switch to a ‘you’ type of narrative where we are introduced to a group of young medical students who are dissecting (i think?) Fumiko’s body. What purpose did this part have? Go figure.
Then back to Henrik and his seemingly unending monologues. He tells us about the random people he sees on the street, and about trailing Asian women who remind him of Fumiko, of meeting and talking to other people (i cannot recall who they were or how they met, that’s how memorable these encounters/friendships were). I had no idea how much time was passing, days, weeks, years? There was no clear passage of time, so I was unsure how long ago Fumiko had committed suicide or how old our mc was. He gives us very little insight into his relationship with Fumiko and because of this lack of information I had a hard time 1) believing in Fumiko (especially since we never really see her ‘alive’ in the present and 2) believing in their dalliance.

Occasionally he does come up with interesting observations regarding Paris, the ‘intellectual’ circles Henrik moves in, and on his identity. Attention is paid in particular to the disconnect he feels between who he is (he feels very danish) and his appearance (which is not ‘typically’ danish). But these speculations (on identity & belonging, the divide between one’s inner and one’s outer self) were drowned out by Henrik’s other thoughts, which often made little sense or struck me as entirely too affected.

Then, all of a sudden, the last section of the narrative goes on about his relationship with his goddaughter. This seemed very out of the blue and has little to do with what had come beforehand. This goddaughter did not sound like a genuine child and her dad was way OTT (at one point he shits in a plastic bag…why? couldn’t he have asked to use his neighbours’ toilet if his own toilet was broken or whatnot?). Here there is a bit of pretending to be what you are not, as in this case, Henrik often acts like his goddaughter’s father.
Nothing truly interesting or new is said on the subject. The story then briefly moves from Paris to Rome and here Henrik seems all of a sudden to remember about Fumiko.

The novel tried very hard to impress its intelligence and artistry on us. I don’t mind erudite asides or creative ramblings but only if they either serve some sort of purpose (in relation to characters or plot) or if they serve as springboards for more interesting discussions/conversations. Here, it seemed they were just trying to create a certain atmosphere. The novel as a whole struck me as being very much influenced by the New Wave. And while it was in a way experimental and clearly postmodernist, it lacked bite, flavour. It was all flash, no substance. At least Beckett is amusing! Here the weirdness was studied, worst still, where was the humor?

Maybe a more engaging or intriguing narrator would have made me more inclined to pay attention to what was going on (then again, was anything really going on?) or what the author was writing about…but Henrik was painfully bland. His voice put me to sleep.

I recommend you check out more positive reviews before you decide whether to give this one a shot or not.