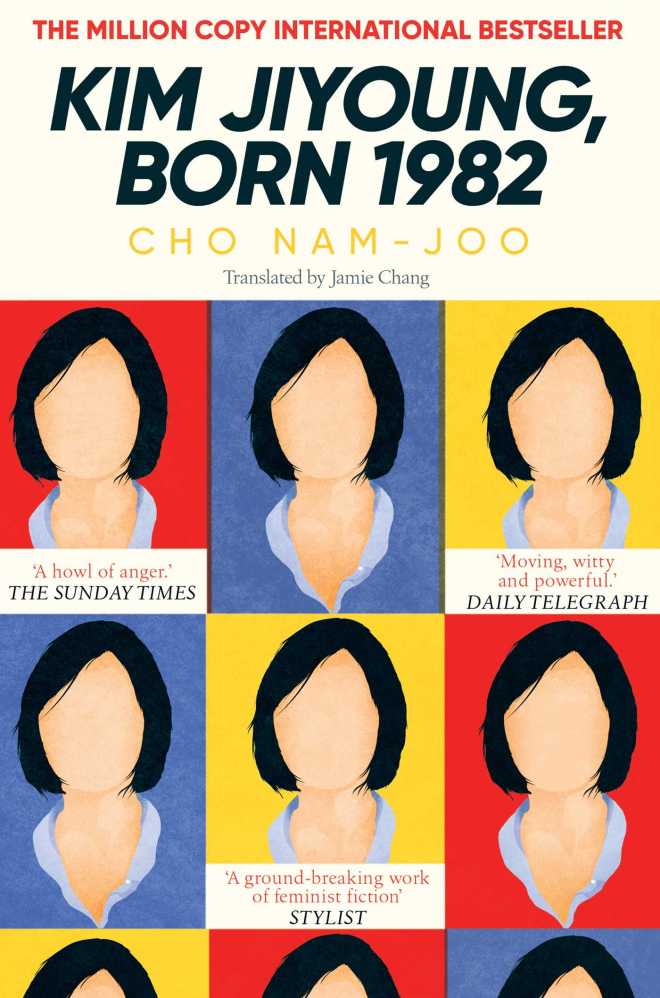 While I appreciated the subject matter (no matter how infuriating & depressing), I could not get into the robotic style.

This book opens with Kim Jiyoune, a housewife and stay-at-home mother, acting in an increasingly concerning manner. Depressive episodes give way to ‘bizarre’ instances in which she emulates the behaviour of other women. Her concerned husband decides to enlist the help of a psychiatrist. The narrative then recounts Kim Jiyoung’s life prior to her marriage. We are given a brief picture of her life at home that highlights the double standards between sons and daughters (which generally see boys having more freedom while girls are expected to be more obsequious and to help around the house). We also ‘overhear’ her father’s victim-blaming rhetoric, which sees him blaming his daughter when harassed by a boy in her school (things on the lines of, ‘you obviously did something to make him think that you were interested in him’). At school male teachers act in highly inappropriate if not downright criminal ways (especially when ‘checking’ the female students’ uniforms). While boys are allowed more casual uniforms, girls have to wear a lot of layers and uncomfortable shoes so that they do not distract male students/teachers (i see red whenever i hear stuff like this), they are discouraged from playing physical activities, and during lunchtime, they are served after the boys and told off for not finishing their food fast enough.
At every stage of her life, Kim Jiyoung is confronted with gender-based discrimination. Once in the ‘workforce’ she quickly realizes that female employees are paid less, have very few chances of advancing, and are often given responsibilities and tasks that should be assigned to the newest employees. Married women are seen as undesirable as ‘likely’ to leave their position due to pregnancy/child-rearing, and very few places offer child-friendly work hours. Additionally, working would earn societal disapproval (because ‘they aren’t taking care of their children and it is ‘unnatural’ for a mother not to want to be with their child 24/7 etc.).
We see how all of these incidents over the years chip away at Kim Jiyoung. Time after time she’s faced with sexist and misogynistic behaviour, from colleagues, strangers, and her loved ones. The more aware she becomes of this, the less able she is to suppress her mounting desperation.
The final chapter brings us back to the present but doesn’t delve too deep into Kim Jiyoung’s mental state.

Kim Jiyoung, Born 1982 reads a lot like a piece of nonfiction. The author’s prose is exceedingly impersonal, clinical even. While I’m not wholly against this type of detached writing style, here it was so unemotional and analytical that I really had a hard time caring and believing in Kim Jiyoung. Did this book elicit some sort of emotional response in me? Yes. But, I’m afraid I cannot credit the authors’ storytelling as being responsible for this. When reading at length about this kind of subject matter (gender inequality, misogyny, sexism) I will inevitably ‘feel’ something (anger, frustration, etc.). While reading Kim Jiyoung, Born 1982 I was reminded of my own close encounters with sexism and misogyny, which aren’t even all that bad but whenever I think back to them mi incazzo (from men leering/shouting at me on the street when i was aged 13 or so, to being told that i should pay no mind to men making inappropriate comments, and if anything, i should be grateful/happy that they were making comments about my body/person, or that time when i and my bf worked in a shoddy cafe together and the team leader used go on anti-women tirades and seemed to enjoy groping us female colleagues, to a stranger sticking his tongue down my throat and snapping at me after being pushed away, to being told that i shouldn’t do certain things because i’m a girl, etc. etc. etc.). What I’m saying is, of course, I felt something. I’m sure many other readers can relate to ​​Kim Jiyoung’s experiences. But I also wondered what was the point of making all these things into a ‘story’? The author basically lists the everyday realities of an average woman, specifically a Korean woman born in 1982 into a relatively stable household.
The recounting of these episodes of sexism & co are a matter of fact and often surface level. The characters are one-dimensional and exist only to illustrate a certain point or address a certain type of behaviour. Kim Jiyoung is so generic that she seemed devoid of a personality. The narrative, whether intentionally or not, robs her of a distinctive voice… So, not only is Kim Jiyoung disempowered by her society’s oppressively traditionalist gender roles and by the many injustices she faces growing up female in Korea, but, the narrative itself denies her an identity. And, while I recognise that the last chapter reframes the rest of the story, I still cannot reconcile myself with this narrative choice. If anything, that last chapter reads like a gimmicky twist. Also, I didn’t quite like how Kim Jiyoung’s breakdown is shown to be a direct result of the patriarchy (especially considering that while she does experience gender-based injustices and microaggressions, at the of the day, much of what she experiences is very much your regular every-day sexism).
Maybe cis male readers or readers who have grown up in really progressive countries will be able to gain something from this book that I wasn’t able to.