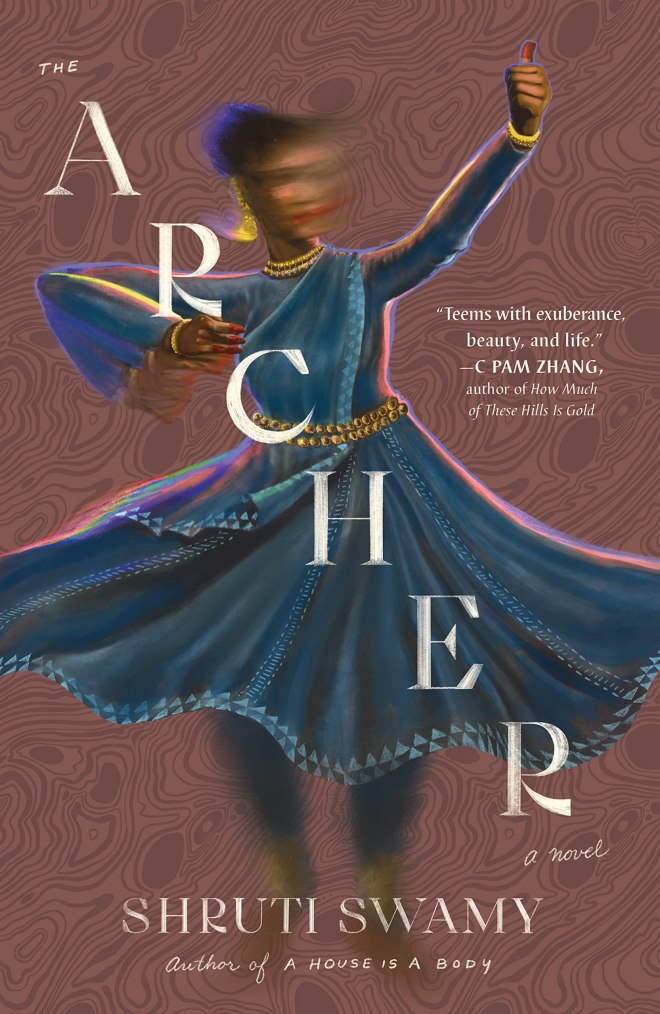 The Archer by Shruti Swamy

Throughout the course of reading The Archer, I was painfully aware that I was in fact reading a novel. That is to say, I did not think this was a particularly ‘immersive coming-of-age’ story, quite the contrary. Almost every line I read struck me as contrived and as attempting (and failing) to be eloquent and adroit. This novel reads like something that should have stayed in drafts or that would have been okay if it had been some sort of MFA project. The verbose and trying-too-hard-to-be literary language was distracting and unimaginative. The main character and her environment felt inconsequential, the narrative more intent on showing off its supposedly ‘lyrical’ prose (which, you guessed it, in my eyes, was anything but). Banal, shallow, and repetitive ​​ The Archer was not for me. If you enjoyed this novel please refrain from commenting on things along the lines ‘you are wrong’. If you want to read this novel…eh, I guess I should remind you to check out more positive reviews.

The Archer begins with a 3rd pov that gives us an overview of the childhood of our protagonist. The narrative year tries to make it so that we are seeing things from the pov of a child, but it doesn’t quite pull it off. Vidya lives in Bombay during a generically historical period. There is Father Sir, Brother, The Mother, and briefly Room-Not-Mother. Vidya has to look after Brother and has to be obedient and respectful towards her elders. Nothing much happens other than some lengthy descriptions about objects or feelings that amount to absolutely nothing. Vidya is devoid of personality because we all know children don’t have those…anyway, one day she sees a Kathak class and wants to learn this type of dance. The Mother eventually dies (i think?) and Vidya is given even more responsibilities. Father Sir plays almost no role, his presence relegated to two or three scenes. The narrative begins switching from a 3rd to a 1st pov, in a painfully artificial attempt at mirroring Vidya becoming aware, through dancing, of ‘the self’.
There is a time skip and the story is narrated by Vidya herself, who is now at university. Once again the narrative is very much all telling, no showing. The author will dedicate a paragraph to describe the flesh of a fruit or the shape of a shoe but spend almost no time fleshing out the secondary characters who soon enough end blurring together. Vidya has a predictable half-hearted relationship with another girl, but because neither of these characters struck me as real I could not bring myself that they would care for each other.
Another time skip and Vidya is married to this generic guy. We learn nothing about him, nothing substantial that is but the author will inform us of the smell of his sweat and his cologne. K. Then we get the predictable pregnancy where Vidya learns that the body is abject.
I just found the language so profoundly irritating. As I said, there are very few scenes actually happening in ‘real time’ on the page. Vidya mostly recounts to us stuff that happens, taking away the immediacy of that moment/scene. There is also very little dialogue so that we spend most of our time just listening to Vidya’s voice. Yet, in spite of the pages and pages she spends navel-gazing, I did not feel as if she was a fleshed-out character. She was an impression, a generic girl who grows up to become a generic young woman. She’s often painted as the victim, but I felt no sympathy towards her.
The prose was full of cliched descriptions and platitudes (“ the scars on her skin making her legs more beautiful instead of less”). There were so many unnecessary words. Time and time again Vidya felt the need to say something backwards (on the lines of ‘it was not that I was sad’). Or we get passages like this: “Something else had been lost, many things had been lost, perhaps everything had been lost, the girl I had been felt far away, though I had come to school to be rid of her—the sad, motherless girl with dry ugly knees and a dark ugly face: that girl, I could not remember her as me, I could only remember her as though I watched her from somewhere outside her body;”. Rather than just saying things as they are, the author will refer to things such as Vidya’s ‘true voice’, or lazy descriptors such as ‘tomorrow-feeling’ and later ‘girl feeling’. Time and again Vidya will not say what she thinks or feels directly. She will preface whatever by saying ‘and so’, ‘perhaps’, ‘it seemed to me’, and then go to say ‘it wasn’t y nor was it x but it was z’. All these words end up amounting to nothing. They did not make Vidya into a more credible character nor did they bring to life her surroundings/experiences. Yet the author will sacrifice character development to these prolonged acts of introspection that actually don’t reveal anything about this character.
This was a bland affair. The best thing about this novel is the cover/title combo. Its contents left much to be desired. I’ve read far more compelling novels about fraught mother/daughter relationships (You Exist Too Much and The Far Field) and I wish that Vidya’s Kathak practices and her relationship with her teacher could have been the focus of the narrative.