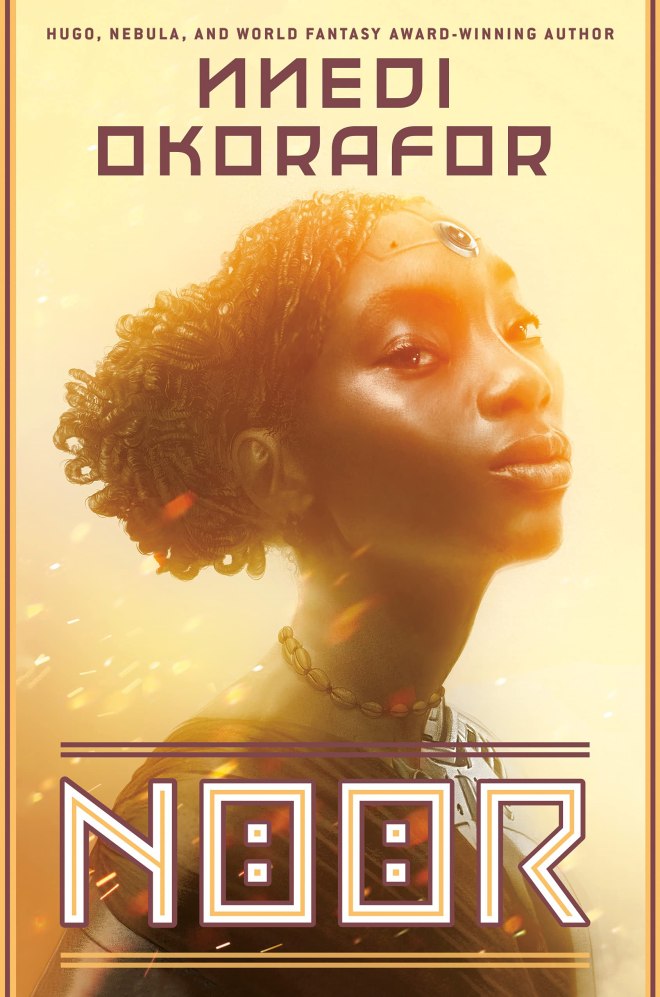 Earlier this year I read and loved Nnedi Okorafor’s Remote Control, which is a truly wonderful novella. Because of this, I was looking forward to Noor as I’m a fan of Okorafor’s take on Africanfuturism and of the way she seamlessly fuses folkloresque fantasy elements with sci-fi ones. While Noor certainly delivers on the Africanfuturism front, pairing this with a commentary on biotechnology, on humanity, and on the realities of being ‘other’, its plot and characters, to my disappointment, struck me as extremely derivative. A bare-bones version of Noor would go like this: we have a dystopian setting where the evil capitalist government is after the heroine who is not like other people and has special powers & her man who is also persona non grata and they eventually join a group of rebels where she comes across ex-lover before final ‘battle’ with the baddies. Anwuli Okwudili, who goes by AO, initials that stand for Artificial Organism, lives in a dystopian Nigeria. She was born with various physical disabilities which were later aggravated by a car accident. To her parents and her society’s disapproval, she goes on to have many body augmentations which enable her to be mobile and pain-free for the first time in her life. The opening sequence is rather clumsily executed as we are given vague descriptions about AO’s world (just how far in the future is it?). After splitting up with her partner who is openly repulsed by her ‘machine’ parts (why were they even together in the first place? she already had augmentations by the time they met, and all of a sudden he’s disgusted by her?) she goes to her local market where she’s attacked. AO is forced to flee and comes across DNA, a Fulani herdsman who is at first quite hostile to her (i’m pretty sure he threatens her…how romantic). The two have to survive the desert together and come across very few other characters, and if they do, it just so happens that those characters are just there to play the role of plot devices to further their story. The narrative allegedly takes place over a week but to be entirely honest the passage of time is rather unclear. It seemed to me that the events that transpire within these pages could have all happened in 1 or 2 days. AO and DNA’s bond felt forced and eye-rolling. They just have to fall in love because she’s a woman and he’s a man and they are both on the run from the evil government. While the first half of the novel is rather vague in terms of worldbuilding we, later on, get a ton of exposition that leaves very little room for interpretation (this is something i would expect from a ya novel, not an adult one). Noor has the trappings of a generic dystopian novel. What ‘saves’ this from being an entirely forgettable and uninspired read are the setting and the overall aesthetic which blends together folklore and technology. Okorafor also adopts the story-within-a-story device which works in her novel’s favour. I just found AO to be hard-to-like and at one point there is a scene about choosing your name which just didn’t go down that well with me (that this novel lacks lgbtq+ characters made it even worse tbh). AO’s ideologies were kind of murky and incongruent so that I found it hard to relate to her. The final section introduces a few more characters who are given very little room to shine as they are sidelined in favour of AO and DNA.
All in all, Noor was disappointing, especially considering how much I loved Remote Control. Ao is no Sankofa and in spite of the longer format, well, here the extra pages do more harm than good (they don’t expand the world or flesh out the characters but end up being about a weird romance and a final act that gave me major martyr vibes ).