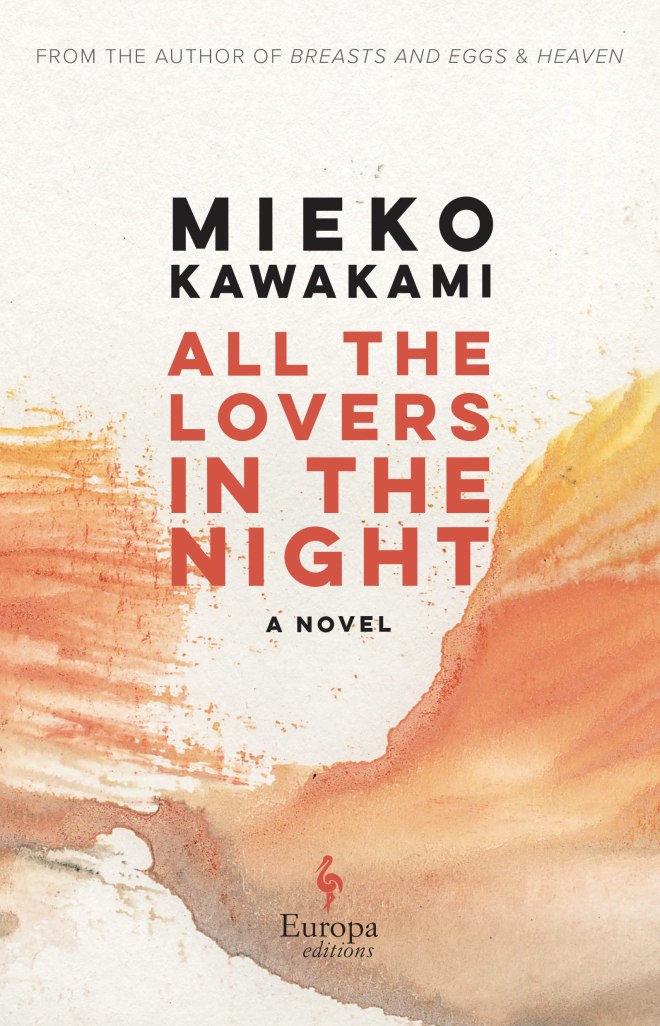 All the Lovers in the Night by Mieko Kawakami

Previously to reading All the Lovers in the Night, I’d read Breasts and Eggs, Heaven, and Ms. Ice Sandwich, by Mieko Kawakami. While I was not ‘fond’ of Breasts and Eggs, I did find her other books to be compelling. As the premise for All the Lovers in the Night did bring to mind Breasts and Eggs, I was worried that I would have a similarly ‘negative’ reading experience. Thankfully, I found All the Lovers in the Night to be insightful and moving. Even more so than Kawakami’s other works, All the Lovers in the Night adheres to a slice-of-life narrative. Yet, in spite of this, the story is by no means light-hearted or superficial. Kawakami approaches difficult topics with this deceptively simple storytelling. She renders the loneliness and anxiety of her central character with clarity and even empathy. Thirty-something Fuyuko Irie leads a solitary life working from home as a freelance copy editor. Her inward nature led her former colleagues to single her out, and she was made to feel increasingly uncomfortable at her workplace. Working from home Fuyuko is able to avoid interacting with others, and seems content with her quiet existence. Fuyuko receives much of her work from Hijiri, an editor who is the same age as her but is very extroverted and possesses a forceful personality. Hijiri, for reasons unknown to Fuyuko, regularly keeps in touch with her and seems to consider her a friend. Perhaps their differences cause Fuyuko to begin questioning her lifestyle. Compared to her glamorous friend, Fuyuko sees herself, to borrow Jane Eyre’s words, as “obscure, plain and little”. But venturing outside the comfort of her home has become difficult for Fuyuko. To work up the courage she begins drinking alcohol, even if her body doesn’t respond well to it. She eventually begins going to a cafe with an older man. While the two speak of nothing much, they seem happy to exchange tentative words with one another.
I can see that this is not the type of novel that will appeal to those readers who are keen on plot-driven stories. However, if you are looking for an affecting character study, look no further. Through Fuyuko’s story, the author addresses how Japanese society sees and treats women who are deemed no longer ‘young’. Marriage, motherhood, and a career seem to be the requirements for many Japanese women. Those like Fuyuko are considered outside of the norm and because of this, they find themselves alienated from others. Fuyuko’s self-esteem is badly affected by this to the point where she feels that she has to go outside her comfort zone, even if the only way to do so is through inebriation. At a certain point, I was worried that Kawakami would make Hijiri into the classic fake/mean female character who is portrayed as aggressive, promiscuous, and a woman-hater to boot. Thankfully that was not the case. While Hijiri is not necessarily a likeable person Kawakami doesn’t paint her as a one-dimensional bitch and her relationship with Fuyuko isn’t sidetracked in favour of the romantic subplot. And yes, on the ‘romance’…I will say that this man wasn’t as nuanced as Fuyuko. I found him slightly boring and generic. I did like that the relationship between the two forms has a very slow build-up to it and the ending will certainly subvert many readers’ expectations.
Anyway, overall I rather enjoyed this. I liked the melancholic mood permeating Fuyuko’s story, the descriptions of Tokyo, the mumblecore dialogues, the way Kawakami articulates Fuyuko’s discomfort, anxiety, etc. Now and again there were even moments of humour and absurdity that alleviated Fuyuko’s more depressing experiences. I also appreciated the novel’s open-ended nature, which added an extra layer of realism to Fuyuko’s story. While some of Fuyuko’s actions aren’t given a ‘why’ or closely inspected, as we read on we begin to understand more fully her various state of mind and how these affect her behaviour.
While the dialogues did have a realistic rhythm, the secondary characters (who usually did most of the talking given that our main character isn’t a talker) did tend to go on very long and weirdly specific monologues that seemed at times incredibly random or oddly revealing. This is something I noticed in other works by Kawakami. Secondary characters go on endless rants or whatnot while our main character gives little to no input. It seems a bit unusual that Fuyumu would come across so many people who are willing to go on these very long monologues that reveal personal stuff. Even so, I did find the majority of the dialogues to be effective.
All the Lovers in the Night is a work of subtle beauty and I look forward to revisiting it again in the future.