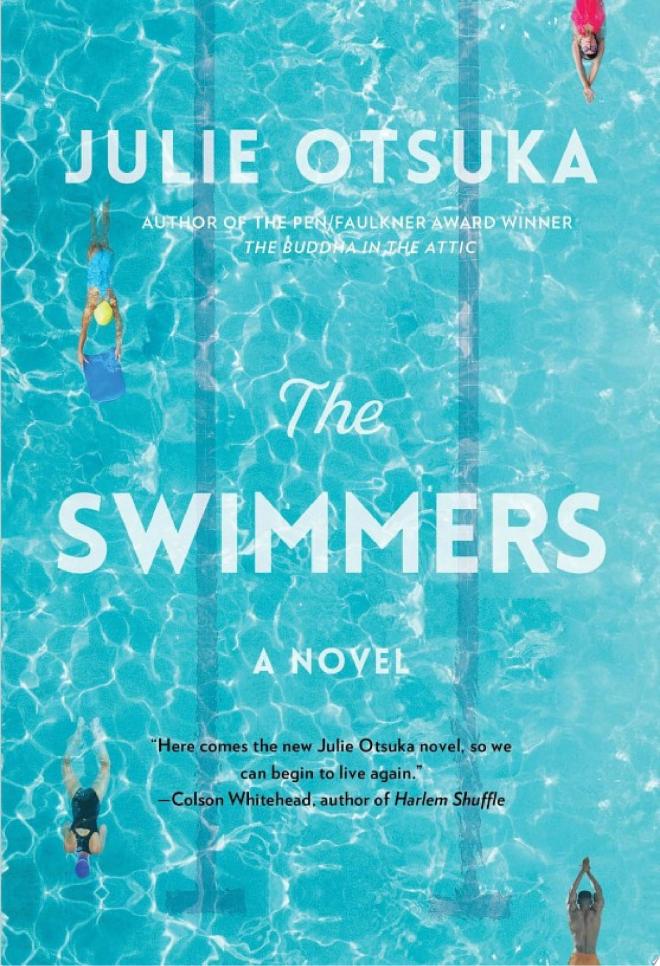 The Swimmers by Julie Otsuka

The first two chapters of The Swimmers, ‘The Underground Pool’ and ‘The Crack’ are highly reminiscent of the author’s acclaimed The Buddha in the Attic. Like that novel The Swimmers at first seems to implement a playful choral ‘we’ as our perspective. The ‘we’ in question are the people who regularly swim at a local pool in an unnamed town. Otsuka details the swimmers’ relationship to the pool and swimming, often poking (gentle) fun at them. While she does often differentiate between the swimmers, contrasting their routines etc., they remain a united entity for much of these chapters. The pool becomes a microcosm of the real world and Otsuka’s satire is particularly effective when a mysterious ‘crack’ appears in the pool, causing confusion and uncertainty among the pool-goers. Some panic and flee, some quit swimming altogether, some begin spreading conspiracy theories about who is behind the crack, some keep on swimming and refuse to look at the crack, and so forth.
The tone is definitely the defining characteristic of these two chapters as the characters are beside the point. They serve a comedic function and their personalities are intentionally kept off the page. Repetition is of course a consequence of employing a choral point of view, especially one that at times comes across as a joke that has gone on too long. These two chapters/stories could have easily been condensed into one and I think it would have made for a more effective and engaging read.

The following chapters/stories revolve around one of the swimmers, but once again the author implements more indirect narrative devices (often there is the ‘you’). The character in question is Alice, a Japanese American woman who shows signs of dementia. While the author does give us an overview of her life and background, by referring to her as ‘you’ or by avoiding using her name she effectively makes Alice into a blank-slate, or perhaps, less of a blank-slate and more of the ‘every-elderly-woman’, ie. the epitome of the elderly person experiencing memory loss, confusion, and an increased lack of motor skills. Her daughter, who happens to be a writer, too was very much a non-character, as she is often referred to as ‘you’. There was a lack of intimacy and depth in these characters (and their relationship to one another) that diluted the impact of what could have been a potentially poignant story. There is even one chapter from the point of ‘Belavista’ a ‘memory residence’ where Alice is eventually taken to. Here the author wryly points to the way elderly people who are no longer able to live independently and need more help than what their relatives can provide them with are treated by these places (eg the patronizing language).

The specificity with which Otsuka writes about Alice’s ‘dementia’ definitely rang true to life as I am temporarily living with someone who has dementia and boy oh boy it is definitely not a walk in the park watching someone slowly lose their physical and mental capacity. Still, while many moments struck me for their realism, Otsuka’s playful tone became a bit jarring and repetitive. I would have liked for this book to have more emotional depth and for characters (any of the characters really) to be more than names on a page. Nevertheless, I encourage prospective readers to make up their own minds about this one!