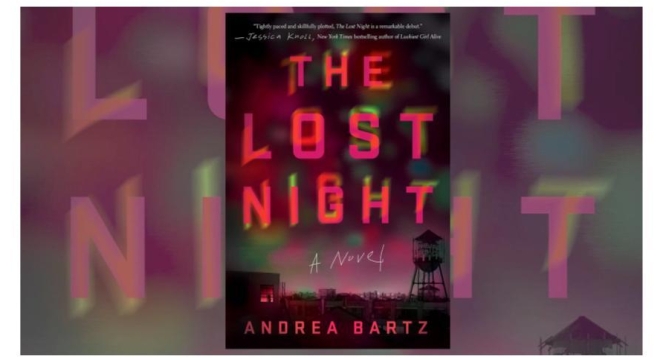 The Lost Night by Andrea Bartz

“I remembered that summer, the last one with Edie, how all the bands we saw blurred into a cacophony of synth and Sarah wore that crazy Day-Glo hat everywhere and I was on a vodka gimlet kick. Not pictured: the violent bouts of crying alone, the change in cabin pressure if Edie was unhappy.”

The best thing about The Lost Night is its striking sense of place and time. The story is one you’ve probably read before. There is this group of friends who becomes estranged after one of them dies. Nearly ten years after her best friend Edie’s suicide Lindsay has a nice apartment, two great friends, and a good job as a head fact-checker for a magazine. After a lunch with Sarah, one of Edie’s ex-roommates, Lindsay finds herself going back to the night of Edie’s suicide. Her patchy recollection of the night’s events clash with Sarah’s ones. As Lindsay goes trough old photos and videos, tracing and questioning Edie’s friends and lovers, she becomes increasingly convinced that Edie was murdered.

While the story does scream originality its setting really stood out . Andrea Bartz brings Bushwick—and New York—to life. Funnily enough, I never think of 2009 as being very different from 2019. Bartz made me think twice about that. Like Lindsay I found myself longing for 2009 and for something that in my case I never even experienced. Bartz captures this volatile friendship between five twenty-somethings with perfect detail.
Some might find the rehashing of Lindsay’s ‘lost night’ to be repetitive. I however enjoyed how each member of the group—as well as ‘external people’—remembered something slightly different. Lindsay’s unreliability did not irritate me given that her ‘blackouts’ were caused by her excessive drinking and by her own mental health. As she reaches out to her old friends she becomes increasingly aware of how dissatisfied she feels with her life. Yes, she could be incredibly frustrating, but I was fascinated by her narrative.

Although I found that final section to be a bit over-the-top, I really enjoyed Lindsay’s slow-paced examination of the past. Again, while I was captivated by the narrative, I wouldn’t read this for its ‘mystery’ storyline. It is a homage to a group of young friends, who live recklessly and with happy abandon. It was interesting to see how some of them grow up to become incredibly different from their past selves.
While the dialogues came across as very realistic, there were some phrases that seemed a bit too trying. They felt very…’debut-like’. These usually had to do with Lindsay’s thinking or feeling things: “A new thought, opening like an umbrella”, “happiness rushing up through me like froth”, “The thought blinked on like a lightbulb”.
Still, I think this is a very promising debut novel. The ‘components’ of the story might seem ‘been there, done that’ but they are presented in a both absorbing and evocative way.

I listened to the audiobook format which probably enhanced my appreciation of this novel.